“Our tax rates, again, are lower than the state of Texas. I just want to remind everybody out there, 95% of Texans pay higher taxes than Californians.” 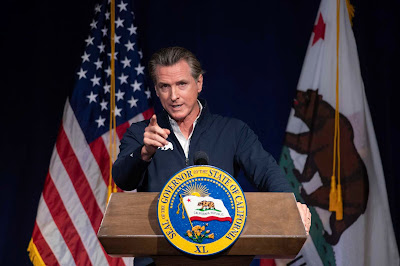 4 MIN READ - The Cautious Optimism Correspondent for Economic Affairs and Other Egghead Stuff, who has lived in both states, runs an easy fact check on the California governor.

The Economics Correspondent would venture to say that all middle-class workers are captured in the three (***) brackets, paying 6%, 8%, and 9.3% of their marginal income taxes.

Sort of hard for 95% of Californians to pay less income tax than Texans when Texans pay zero.

But what about other taxes? Some Californians claim Texans make up for the zero-income tax by paying higher sales, gasoline, and property taxes.

Both states give counties and cities the option to add additional taxes.

In Texas counties can add up to 1% and cities another 1% for an absolute top sales tax rate of 8.25%. Most major cities in Texas opt for the full 8.25% as do many rural counties.

In California counties and cities can go higher than 8.25% if they want. But do they?

The exceptions are Orange, Sacramento, and San Diego counties which charge 7.75% as do many rural counties.

Verdict: Californians on the whole pay more in sales taxes than Texans.

ps. Incidentally California law requires residents to report purchases *outside* California and pay sales tax on them too, but hardly anyone complies. The law was designed mostly to target California businesses.

(3) But what about property taxes? Californians love to complain about Texas’ property tax rates.

During the 1970’s California tax revolt voters approved Proposition 13 which capped residential property tax rates at about 1.2% the value of the home.

So yes, property tax *rates* are higher in Texas.

But it’s not only the rate that determines your tax bill, but the home value too. And in Texas homes are a lot less expensive, and you get more house for the money.

Comparing major cities, a house that might cost $300,000 in Houston or Dallas will cost more like $1 million in Los Angeles or Oakland. And closer to $1.5 million or $2+ million in San Francisco and San Jose.

So Texas property tax rates are about 2 to 2.3 times higher, but California homes are 3 to 7 times more expensive.

Comment: One advantage old homeowners have in California is that their property tax rate is based on the purchase price of their home, not the assessed price, whereas in Texas every time the home is assessed by the tax collector the tax bill rises.

So initially Californians do pay a lot more in property taxes, but after the California and Texas homes rise about 50% to 200% in value, depending on location, the two homeowners start paying about the same tax bill, and once the home values rise even higher the Texan pays more for a few years to compensate for his far lower tax bill in the early years.

Finally, after all those years have passed the Texan starts paying more property taxes overall going forward. It's difficult to calculate exactly how long it takes for this process to play out but a good ballpark guess would start at living for two decades in the same home.

(4) Gasoline taxes. This one is easy.

California adds 53.9 cents per gallon in taxes. And by law it increases by about 5% every year.

So your average Texan has to burn through 2.7 times more gasoline annually to pay the same taxes Californians do.

Both states’ residents have long commutes, particularly in the big cities.

Having lived in both states it’s an easy call.

Residents of Los Angeles and Orange County metro area (13.2 million people) have longer drives and get stuck in more traffic than those of Dallas/Fort Worth and Houston areas (14.6 million people).

The same is mostly true for residents of the San Francisco Bay Area (6.6 million people) compared to the San Antonio and Austin areas (4.8 million people).

OK, San Antonio is easier. Anyone who has lived in Austin will tell you the traffic congestion is probably worse although the commutes are still shorter than those for Bay Area residents.

(5) One more. If Newsom is right that 95% of Californians pay fewer taxes than Texans, wouldn’t Texans be fleeing to California instead of the other way round?

Final summation? Californians pay more in income taxes, sales taxes, and gasoline taxes. Most Californians pay far more in property taxes although once you’ve lived in your house for perhaps two decades it evens out and after that Texans might start paying more.

And the final verdict? Newsom’s lips were moving. Therefore his claim was false.