8 MIN READ - A dispatch from the Cautious Optimism Correspondent for Economic Affairs and Other Egghead Stuff. 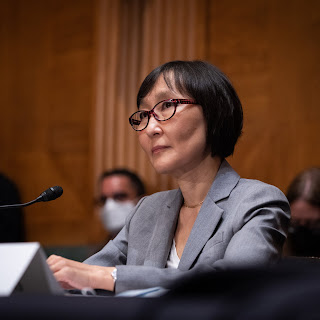 It’s been two months since Professor Saule Omarova withdrew her nomination for Chairperson of the Office of the Comptroller of the Currency, one of the two federal bank regulator agencies.

President Joe Biden’s nomination of Omarova was controversial from the start. For CO Readers who didn’t follow her confirmation process closely, here are a few of her resume’s more glaring accomplishments:

-Omarova was born in the Soviet Republic of Kazakhstan and was a member of the Komsomol, the Soviet Youth Communist League.

-She attended Moscow State University on a Vladimir Lenin academic scholarship. Her thesis was “Karl Marx's Economic Analysis and the Theory of Revolution in The Capital.”

-After immigrating to the United States and pursuing an academic career, she wrote papers proposing all private bank accounts be nationalized under the central bank (the Federal Reserve) in “an overtly radical reform.”

-Her academic writings call for removing private banks from all credit and lending decisions, centralizing national credit policy at the Federal Reserve—in her words to “effectively end banking as we know it.”

-Her academic writings have advocated government control of wages and setting “systemically important prices.” As she tweeted in 2019: “Say what you will about old USSR, there was no gender pay gap there. Market doesn’t always ‘know best’.”

-As recently as 2019 Omarova joined a Facebook page dedicated to Marxist and socialist analysis and discussion.

-As recently as 2021, the same year of her nomination, Omarova was recorded in a policy webconference asserting that “A lot of the smaller players in that industry [coal, oil, and gas] will probably go bankrupt in short order, at least we want them to go bankrupt if we want to tackle climate change.”

-In another 2021 online conference she touted "The way we basically get rid of those carbon financiers is we starve them of their sources of capital."

-When confronted with surefire opposition from the banking industry and concerns from Congressional Republicans, and even some Democrats, Omarova dismissed the pushback as racial and sex discrimination, explaining in a television interview that “I am an easy target: an immigrant, a woman, a minority. I don’t look like your typical comptroller of the currency, I have a different history. I am easy to demonize.”

OK now that we’ve established Omarova’s controversial background, her nomination was effectively doomed when two Democrats on the Senate Banking Committee and at least one other Senate Democrat opposed her confirmation. She withdrew in December.

The Economics Correspondent was curious who, if anyone, would defend Omarova as victim and martyr and he didn’t have to look far.

Sherrod Brown (D-OH) isn’t exactly a household name, but he chairs the Senate Banking Committee and when Omarova withdrew her nomination he didn’t pull any punches.

From the New York Times:

“’In a relentless smear campaign reminiscent of red scare McCarthyism, they have shamefully attacked her family, her heritage and her commitment to American ideals,’ he [Brown] said.”

Let’s take apart that statement for a minute.

Senator Joseph McCarthy famously went after alleged communists in the early 1950’s, launching investigations and holding hearings where he subpoenaed suspected witnesses before his committee.

He routinely asked them “Are you or have you ever been a member of the Communist Party?”

While many of his targets were indeed Communist Party members, communist operatives, or communist sympathizers, some were also innocent and lost their private sector jobs simply due to the stigma of being subjected to public investigation. For that reason, although McCarthy was often proven right both at the time and posthumously, his method of operation’s tendency to leave personal destruction of innocent witnesses in its wake, and the term McCarthyism itself, carry a negative connotation.

So, just how much did Omarova’s nomination hearings resemble “red scare McCarthyism?”

The answer is not much.

1) First and foremost, McCarthyism is criticized for asking witnesses if they “are or have ever been a member of the Communist Party,” even when they weren’t, and destroying their reputation just by virtue of being asked on such a grand stage.

Well there’s no mystery about Omarova. The world already knows she was a member of the Communist Party in the USSR, and when asked by Senator John Kennedy (R-LA) if she ever resigned her membership she wouldn’t say no, only replying “As far as I remember how the Soviet Union worked at certain age you automatically stop being a member.”

In Omarova’s case there was no McCarthyite attempt to brand her with Communist Party credentials that didn’t exist. It was public knowledge that she was a member of the Youth Communist League and she couldn’t answer if she’s no longer one today.

2) There was no McCarthyite smearing or misrepresentation of her policy views. She has openly called for government nationalization of all private bank accounts and takeover of credit/lending policy decisions, effectively removing the private banking industry from the national deposit-taking and lending process.

3) It’s not a “red scare” tactic to quote Omarova’s own words, calling for using government control of the banking system to “get rid of those carbon financiers…” and “…starve them of their sources of capital." She said it herself on video just months before her nomination. It's all on YouTube.

4) Omarova is hardly going to lose her job or become a social outcast resulting from these hearings. In fact the Correspondent will wager a high-paid commentator/contributor position is hers for the asking at MSNBC or the New York Times. She only need hit the reply button.

Senator Brown’s statement demonstrates that he thinks “red scare McCarthyism” is a shameful tactic. To Brown, pinning blame for everything on Moscow and shadowy Russian figures engaged in conspiracy to undermine U.S. democracy—all without evidence and for the purpose of destroying people—was an immoral political tactic that should never be repeated and has no place in American society not to mention the U.S. Senate.

In pursuit of all shadowy things Russian, General Michael Flynn was victimized by a “get him to lie” FBI entrapment ruse. The lives and reputations of Roger Stone and George Papadopoulos, neither of whom had any involvement with Moscow or “Russian collusion,” and the latter of whom sidestepped an attempted entrapment ambush by FBI mole Stefan Halper, were also left wrecked in the investigation’s wake.

3) In February of 2020, seven months after the Mueller Report concluded ““[T]he investigation did not establish that members of the Trump Campaign conspired or coordinated with the Russian government in its election interference activities,” Senator Brown wrote a letter to Secretary of State Mike Pompeo alleging:

“It’s clear the President’s relationship with Putin is questionable, for whatever reasons. And we know from intelligence stories already that the President is trying to cheat in 2020, that the Russians are helping the president again… …Of course he has, because they’re helping him… …because he’s so close to the Russians.”

-From “Sen. Sherrod Brown says Trump is working with Russia to help his re-election,” Cleveland.com

4) In September of 2020, thirteen months before Joe Biden nominated Omarova to the OCC Chair, Brown continued with his personal brand of red scare McCarthyism:

Finally, a historical correction that the Correspondent wishes Senator John Kennedy had made to Omarova during her testimony.

When questioned about her Soviet communist credentials and openly stated views on nationalizing private bank accounts, Omarova denied strongly any association to “that ideology.” As evidence she passionately cited her own family’s persecution under the Soviets.

Omarova: “My family suffered under the communist regime. I grew up without knowing half of my family. My grandmother herself escaped death twice under the Stalin regime.”

While her family’s sad story is consistent with those of countless millions during the Stalin era, it does absolutely nothing to prove she or her family weren’t or aren’t communists.

Under Stalin it didn’t matter if you were a communist or not. During the Great Terror he had five of the seven original 1917 Politburo members executed. The only reason he didn’t execute all seven is that the sixth, Vladimir Lenin, had already died in 1924, and the seventh was Stalin himself.

Of the 1966 delegates who attended the 1934 17th Soviet Communist Party Congress, only 858 returned to the 1939 18th Party Congress (the Great Terror being conducted in the years between), the rest shot or sent to the Arctic gulag by Stalin.

Of the 81 top generals and admirals of the Soviet armed forces that Stalin purged (out of 103), many were communists.

Of the nearly 10 million Soviets starved to death by Stalin in Ukraine, Kazakhstan, Azerbaijan, Armenia, Georgia, and Western Siberia, many hundreds of thousands were communists.

As Stalin handed out NKVD execution quotas to every city, town, and village of the USSR, ordering “the arrest and execution of X enemies of the people by deadline Y,” many of those hung or shot were communists. The local police cared only about meeting their execution targets, not party membership.

Millions of victims of the Soviet gulag prison system were communists.

Many of the millions of Soviet satellite victims who were forcibly relocated off their land were communists.

Many communists fled the USSR, only to relocate to the West and preach that Lenin and Stalin “didn’t practice real communism” while remaining steadfast communists in their new homes.

So the fact that Omarova’s family fell victim to Stalin doesn’t prove in any way that they were not communists or that Omarova herself isn’t. The Correspondent wishes Kennedy had called her out on her history, but still found his line of questioning revealing enough.

If you want to see the brief confirmation hearings exchange between Kennedy and Omarova ("I don't know whether to call you professor or comrade") watch video below: