Anatomy of a Deception: The Press Rips “The Largest Oil and Gas Companies” For the Sin of Returning to Profitability

7 MIN READ - The Cautious Optimism Correspondent for Economic Affairs and Other Egghead Stuff uncovers yet more dishonest reporting on the American, and for that matter entire world’s, energy industry. 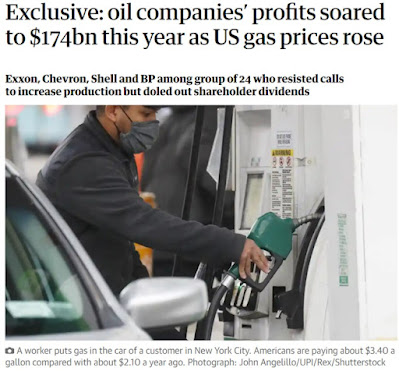 (Credit to CO Nation reader R.S. for directing me to this article by the U.K. Guardian)

Therefore it was no surprise when many news outlets recently seized upon a report on the energy sector’s return to profitability in 2021, with the heavy-left leaning U.K. Guardian using it to slam Big Oil.

According to the Guardian’s indictment “the largest oil and gas companies made a combined $174bn in profits in the first nine months of the year.”

“The largest oil and gas companies” is already inaccurate as we shall see in a moment, but the Guardian then went on to criticize oil companies for paying or reinstating dividends and share buybacks while…

“Gasoline prices have hit a seven-year high in the U.S. due to the rising cost of oil, with Americans now paying about $3.40 for a gallon of fuel compared with around $2.10 a year ago.”

The only foray outside the U.S. is a quick mention of two European oil majors: Shell and BP.

So what’s wrong with the Guardian’s article? There are so many misrepresentations, omissions, and errors to list, so without further ado let’s start with a numbered list.

1) Being a close follower of the energy industry, the Economics Correspondent instantly noticed the $174 billion figure sounded far too high for American oil companies or even American firms + BP and Shell.

Even throwing in the next largest multinationals which aren't even on the list, French Total SE and Italian Eni, the number still sounded too high.

Let’s start with the core data. After a little research the Correspondent found the study. The link was excluded from the Guardian article but it can be found with a web search and appears at this article's end.

The study was released by “Accountable.us,” an activist organization described by even Wikipedia as “a left-wing political group created in the summer of 2008. Its goal is to reduce political donations to conservative 527 groups.”

And just five pages into the report was the list of “the largest oil and gas companies” and their nine-month profits for Q1 through Q3 of 2021. Here’s a quick glance:

And sure enough, all 24 added together made $174 billion in net income.

But you might notice that the most profitable company on the list, which made more than the bottom 21 combined, is not an American company at all: Saudi Aramco or the Saudi government’s national oil company.

In fact, the 15 U.S. firms accounted for just one-quarter of the “shock-effect” total.

2) So where did the rest of the profits come from?

An OPEC state-operation sat atop the study’s profit pyramid, and the Guardian never mentioned it.

In fact, only one other state-owned firm was listed—Norway’s Equinor—which made $6.0 billion.

So two state-owned companies made nearly twice as much as 15 U.S. companies.

LITTERED WITH DECEPTIONS AND OMISSIONS

3) Also, some of the U.S. firms mentioned are primarily natural gas producers (Chesapeake and Cabot) which has nothing to do with gasoline prices at the pump, and many of the others receive a large share of their profits from natural gas too.

In late 2018 ExxonMobil was the #2 producer of U.S. natural gas with Devon Energy at #13 and Chevron at #15. Their natural gas profits have virtually no bearing on gasoline prices at American pumps.

4) Furthermore the U.S. list is dotted with smaller companies that made statistically insignificant profits. It doesn’t make a lot of sense to place companies like Cabot, Plains All American, and Phillips 66 on the list with profits of $220 million, $147 million, and $44 million (!) when ExxonMobil’s $14.3 billion profit is 35 times greater than all three combined.

The Economics Correspondent can’t read the minds of the “study’s” authors, but the strange combination of many tiny U.S. firms with two European supermajors and only two state-owned firms, one of which completely dominates the profit picture (Saudi Aramco), looks like mathematical manipulation: an attempt to inflate the total profit figure as much as possible with just one or two state-owned enterprises while portraying primarily private U.S. firms as hosing consumers.

The Guardian made no mention of the fact that companies like ExxonMobil, BP, and Shell lost $22.4 billion, $20.3 billion, and $21.6 billion respectively the year prior (over $64 billion in losses), when Covid shutdowns decimated worldwide energy demand and oil futures contract prices incredibly went negative in early 2020.

Why shouldn’t these firms reinstate dividends and share buybacks once they return to profitability? Are they not allowed to deliver a return to shareholders while making money for the service of bringing energy to the world?

OTHER INDUSTRIES, OTHER COUNTRIES

Microsoft also made more: $48.8 billion in the most recent three quarters.

I haven’t seen a Guardian article attacking Apple, Microsoft, or Google for gouging consumers yet but perhaps it’s out there. After all they’re private companies too, but not being “climate criminals” the Guardian probably hates them a bit less intensely.

7) Or let’s talk about profit margins.

That was after paying $5 billion in U.S. corporate income taxes, $15.9 billion in sales taxes, and $24.3 billion in other taxes and international duties for a total tax bill of $45.2 billion.

Exxon paid over three dollars in taxes for each one dollar of net profit.

I’m sure politicians on both sides of the Atlantic are warming up their “don’t pay their fair share” speeches right now. And most New York Times and U.K. Guardian readers will actually believe it.

8 ) As we near the end, there’s the important issue of other countries.

The Guardian and Accountable.us study omitted nearly all the world’s state-owned energy firms—other than behemoth Saudi Aramco which it used to inflate the group's bottom line and then pin it on private western energy companies.

The reserves, operations, and profits of most state-owned companies, mostly OPEC members, dwarf private multinationals like ExxonMobil. If the Guardian really wanted to attack energy companies for making big profits off the backs of American commuters they would have targeted national oil companies, not Exxon, BP, or Shell.

In fact, in what’s no surprise to those who know the oil and gas business, the Wall Street Journal reports that in terms of controlled oil and gas reserve holdings, the top 13 energy companies on earth are all state-owned.

Furthermore, a statistic that would shock the world’s lefties:

9) And just why doesn’t the Guardian criticize the national oil companies of Saudi Arabia, Iraq, Kuwait, Russia, China, Venezuela, Iran, and others?

In the last three years the Guardian has run opinion pieces calling for the British government to nationalize the water, electricity, energy, railroad, and broadband Internet industries. And the paper is opposed to any hint of even partial privatization of Britain’s already government-run healthcare system.

It also praised Hugo Chavez’s socialist government’s policies (including nationalization of key industries) all the way up to late 2013, when the rest of the world had long since seen the disaster Venezuela had become.

====
Addendum: The Accountable.us report's accounting of Canada-based Enbridge's profit appears to be in error.

This reduces the overall group's income to $160.8 billion and elevates Saudi Aramco's profit to greater than 22 of the 23 remaining companies combined.

Sources for the story: