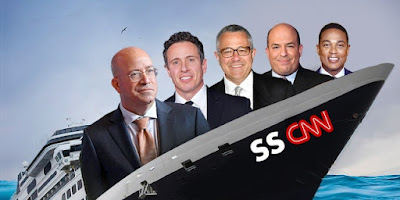 1 MIN READ - The Cautious Optimism Correspondent for Left Coast Affairs and Other Inexplicable Phenomena thinks there might be a pattern of behavior at CNN here.

1) Oct 2020 - CNN commentator Jeffrey Toobin is suspended for, shall we say, "manually pleasing himself" live on a Zoom work conference call. However he’s back on the job eight months later.

2) Dec 2021 - CNN anchor Don Lemon is sued for allegedly assaulting a man sexually in a bar. The plaintiff and alleged victim state the network is "rife with predators and perverts."

3) Dec 2021 - CNN primetime anchor Chris Cuomo resigns in light of accusations he sexually harassed a coworker. Shortly before those accusations came to light Cuomo was also found in state Attorney General investigation documents to have attempted to manage media coverage of his brother, former New York Governor Andrew Cuomo, who is fighting off nearly a dozen sexual harassment suits of his own.

So far the Correspondent has yet to see frequency of media coverage of this rapid string of lawsuits, investigations, and arrests coming anywhere close to that of the 2016 Roger Ailes story at Fox News--a single offender.

Could the USA’s newspapers and networks just not yet have noticed a pattern?