8 MIN READ - The Cautious Optimism Correspondent for Economic Affairs and Other Egghead Stuff visits the basics of calculating corporate profitability, a math lesson that most “living wage” proponents have never taken and still refuse to learn. 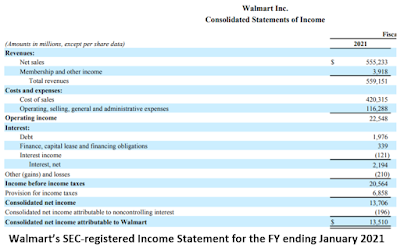 Minimum-wage proponents are constantly trying to justify higher government-mandated wage floors on the grounds that corporations are “swimming in loot” and can “easily afford” to give their low-skilled workers big pay raises. They often cite impressive Walmart or Amazon profit figures in the billions of dollars and claim such numbers prove that raising low-skilled worker wages to $15 per hour would only cost a proverbial drop in the bucket.

Here’s a good example: “Walmart made a gross profit of $138 billion last year. Of course they can pay $15 an hour to their employees. It’s not money but rather shameless greed that is holding them back.”

These sorts of statements are rooted in pure ignorance of basic corporate accounting, plain and simple.

The Economics Correspondent will give a brief overview of consolidated revenue, cost, and profit statements in accordance with universal accounting standards that public corporations file with the Securities and Exchange Commission and hopes to be brief enough to keep your attention.

First, gross profit is NOT final profit. Gross profit is revenues minus only those costs associated with making/delivering the final product, ie. “cost of sales.”

The examples referenced in the next few paragraphs are available from the income statement in Walmart’s SEC 10-K filing page 54.

So in Walmart’s case yes, in calendar 2020 total revenues were an impressive $559.1 billion, and the $420.3 billion cost of buying consumer products at the wholesale level, transporting them to stores, and paying employees to do so did leave Walmart with a gross profit of $138.8 billion.

But that’s hardly the end of Walmart’s costs. Corporations then have to subtract “Selling, General, and Administrative” expenses (aka. SG&A) which includes paying service vendors, operating costs of running thousands of stores, HR and IT, the huge expense of advertising and marketing, and a lot more.

Furthermore corporations have to subtract “depreciation and amortization” (D&A). Some companies make a huge investment buying capital equipment at which time the value of the investment is logged as the purchase price. But over time the equipment wears out and has to be replaced, and that depreciation is amortized over several years as an expense. Once it wears out the company buys replacements that are once again recorded as a non-loss transaction that will be amortized over several years in another cycle.

Walmart’s considerable SG&A and negligible D&A costs in 2020 totaled $116.3 billion which withered their gross profit down from $138.8 billion to just $22.5 billion.

So much for that imaginary $138.8 billion profit that greedy Walmart executives were just holding back from their oppressed workers.

IT’S NOT OVER: INTEREST EXPENSE AND INCOME TAXES

Then there’s interest expense for debt financing. Corporations borrow billions, sometimes tens of billions of dollars to fund operations and capital investments. Walmart’s interest costs in 2020 were actually pretty low for a company their size: $2 billion because they only have about $44 billion in debt and get a fairly low interest rate. By comparison AT&T, with less than one-third of Walmart’s topline, pays $8 billion a year in interest on $150 billion in long-term debt.

So after $2 billion in interest payments Walmart’s pretax income is now down to $20.5 billion.

And sooner or later Walmart will also have to pay the $44 billion in loans back or roll them over.

So in the end, Walmart’s actual bottom line—called “net income,” the profit that really matters—was $13.5 billion. That’s less than one-tenth the fallacious gross profit number parroted by liberals of $138.8 billion.

It’s also a net profit margin—again the one that really matters—of only 2.4%.

Incidentally, nearly all companies, even those that post consistent net losses, run positive gross profits. It’s SG&A, D&A, and interest that decides if the company will ultimately be profitable or not. But gross profits make a more convenient target for labor proponents since it's always a bigger, but totally fallacious number.

Of course even having established a much lower net income of $13.5 billion the Fight-for-$15 activist will still argue “Hey, $13.5 billion is all the money in the world. Only greed is preventing them from paying $15 per hour.”

Walmart has 2.3 million employees worldwide. Granted some aren’t minimum wage workers and some are overseas. But with that many employees, it only takes an average raise of $2.82 per hour for fulltime employees to generate $13.5 billion in new annual costs. And when adding in the extra payroll and Medicare taxes Walmart has to add on it really only takes a raise of $2.62 per hour.

With a universal $2.62-per-hour raise generating $13.5 billion more in costs Walmart’s gross profit may only fall from $138.8 billion to $125.3 billion, but SG&A, D&A, and interest costs are virtually independent of wages so when subtracting them too most of Walmart’s net income before taxes is wiped out.

Give a bigger raise of $4 or $5 or $7.75 an hour and Walmart literally becomes unprofitable.

This is why people in the know say “retail operates on razor thin margins.”

In fact, with net profits reduced from $13.5 billion to low single-digits or even zero, creditors will demand higher interest rates as security against Walmart’s higher credit risk. So with the added burden of billions more in interest payments Walmart quickly becomes even more unprofitable.

And remember, 2020 was a banner year for Walmart and other big box retailers as the Covid pandemic drummed up an epic amount of business for them. That party isn't going to last forever.

But some of you may ask: Seriously, if the national minimum wage is raised to $15-per-hour, will Walmart’s profits really disappear?

The answer is of course not. Because Walmart won’t take it sitting down. They’ll still eke out a profit, but only by raising prices to whatever level is necessary to cover all these costs.

And when prices go up across the board consumer demand will correspondingly decline, and tens or even hundreds of thousands of previously busy workers will find themselves either replaced by automation or outright fired due to not enough work.

This is the pattern seen over and over in industry after industry when wage floors are raised. It’s also exactly what happened with three great waves of government-mandated pay hikes during the Great Depression that resulted in three great waves of skyrocketing national unemployment (see Economics Correspondent’s article on that disaster at the URL below: )

And the countless victims who become unemployed will predictably be ignored by Fight for $15 activists as though they never existed.

So to review in mathematical form:

*Cited by progressive liberals as a company’s profit

On a more personal note, the Economics Correspondent was aggressively confronted by a CO reader from California (whose identity we’ll keep anonymous—the point is not the person but rather the misguided principle) who claimed to have “decades of business experience…”

…and sanctimoniously declared “Subway made a gross profit of $2.5 billion last year. They can easily afford to pay $15 an hour but they’re too greedy!”

Given that Subway is not even a publicly traded company and files none of its finances with the SEC, the Correspondent was puzzled how this reader claimed to know Subway’s gross profit. However Subway Corporation has publicly announced annual revenues of about $10 billion and about 440,000 worldwide employees mostly paid by franchisees, so we’ll assume for the moment the $2.5 billion gross profit number is correct.

But for someone who claims to have vast business experience, our commenter didn’t seem to know much about accounting.

First, as we’ve already established, gross profit is not the same as net profit. Any business owner is supposed to know this.

Then the final arbiter of profitability versus loss is often borrowing costs.

We don’t have their income statements to look at, but after SG&A, D&A, interest, and taxes Subway Corporation would be lucky to post net income of a few hundred million dollars, not $2.5 billion.

And with 440,000 associates employed mostly by franchisees who typically run even thinner margins than the corporation, who are typically smalltime local businessmen, and who are not worth billions of dollars, if each worker received just a $2.75 per hour raise ($2.55 before payroll and Medicare taxes) costs would rise systemwide by over $2.5 billion which wipes out the corporation’s entire gross profit and drives net income down to a multibillion dollar loss.

Granted most of the wage cost would be borne by the franchisees—who are not the fat cats our commenter paints them out to be and who run even more fragile profit margins—not the corporation itself. But the pressing point is regardless of whether we start with the corporation’s gross profit or the franchisees’, $15-per-hour will drive net income into losses unless, once again, the company/operators predictably raise prices, suppress demand, lay off workers, and in many cases even close stores.

It seems even someone claiming to have “decades of business experience” can also be painfully ignorant of the difference between gross and net profit. Which is why financially competent businesspeople run corporations and not Facebook commenters who, from the comfort of their homes and blessed ignorance of corporate accounting, self-righteously demand the power to run someone else’s business into the ground while getting its most vulnerable workers fired.