4 MIN READ - A Deep Fannie dive courtesy of the Cautious Optimism Correspondent for Economic Affairs and other Egghead Stuff. 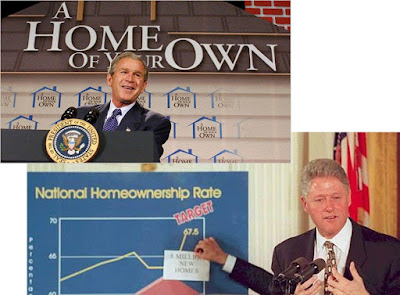 It was ten years ago on September 6th that taxpayer-backed GSE’s Fannie Mae and Freddie Mac—which owned or guaranteed over half of the $12 trillion U.S. residential mortgage market at the time—were taken into conservatorship by the U.S. Treasury and Federal Housing Finance Agency. The distressed financial positions and effective failures of the two housing giants served as a prelude to the major financial crisis that would climax in the month starting a little over one week later.

Here are some statutes, briefing passages, and quotes from the years before Fannie and Freddie’s demise that have already nearly disappeared from the media, and academic/policy record.

1) "The Federal National Mortgage Association and the Federal Home Loan Mortgage Corporation have an affirmative obligation to facilitate the financing of affordable housing for low- and moderate-income families in a manner consistent with their overall public purposes, while maintaining a strong financial condition and a reasonable economic return"

2) "Low- and moderate-income goal. At least 50 percent of the dwelling units financed by each GSE’s mortgage purchases should be for families with incomes no greater than area median income (AMI), defined as median income for the metropolitan area or nonmetropolitan county. The corresponding goal was 42 percent for 1997-2000.”

4) "Fannie Mae and Freddie Mac will have to increase their funding of mortgages for low- and moderate-income home buyers, under a new rule the Department of Housing and Urban Development announced yesterday."

"To meet the new goals, Fannie and Freddie will need to buy over the next four years an estimated 400,000 more qualifying loans than the 10 million loans they otherwise would have bought."

6) "We will take CRA loans off your hands–we will buy them from your portfolios, or package them into securities–so you have fresh cash to make more CRA loans. Some people have assumed we don’t buy tough loans. Let me correct that misimpression right now. We want your CRA loans because they help us meet our housing goals.”

7) "Fannie Mae will buy CRA loans from lenders’ portfolios; we’ll package them into securities; we’ll purchase CRA mortgages at the point of origination; and we’ll create customized CRA-targeted securities. This expanded approach has improved liquidity in the secondary market for CRA product, and has helped our lenders leverage even more CRA lending."

8.) "Countrywide's goal is to meet the Six Hundred Billion Dollar challenge, funding $600 billion in home loans to minorities and lower-income borrowers, and to borrowers in lower-income communities, between 2001 and 2010. As of July 31, 2004, the company had funded nearly $301 billion toward this goal."

"The result of these efforts is an enormous pipeline of mortgages to low- and moderate-income buyers. With this pipeline, Countrywide Securities Corporation (CSC) can potentially help you meet your Community Reinvestment Act (CRA) goals by offering both whole loan and mortgage-backed securities that are eligible for CRA credit."

9) "Fannie Mae and Freddie Mac, government-sponsored enterprises (GSEs) in the secondary mortgage market, are the two largest sources of housing finance in the United States. They fund these mortgages by purchasing loans directly from primary market mortgage originators, such as mortgage bankers and depository institutions, and holding these loans in portfolio, or by acting as a conduit and issuing mortgage-backed securities (MBS), which are then sold in the capital markets to a wide variety of investors. HUD has estimated that 11.7 million dwelling units were financed by conventional conforming mortgages in 1998, and that the GSEs provided financing for 55 percent of these units."