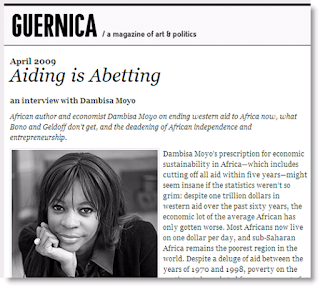 “A friend of mine had a great quote: ‘Africa is to the development industry what Mars is to NASA.’ NASA spends billions on a MARS project, but they don’t really think we’re going there. Same with aid. Billions are spent, but no one really thinks it’s going to develop Africa.”

As billions of people on the Asian continent rise from poverty in human history’s greatest economic emergence, Africa remains the world’s economic basketcase. The West’s unwavering prescription for the continent’s routine famines, epidemics, hyperinflations, and civil wars has been aid: well beyond a trillion dollars over the last seventy years to people who have largely lived on less than a dollar a day.

Politicians, movie stars, and academics have forcefully appealed to public sympathy and governments to “give, give, give.” So-called Glamour-Aid musicians like Bob Geldof, Sting, and U2’s Bono started their own celebrity movement in the 1980’s with Band-Aid and U.S. and Canadian artists soon followed suit. Throwing more and more money at the problem seems to have no end.

But in this fascinating interview, Zambian-born Harvard and Oxford-educated economist Dambisa Moyo argues seventy years of atrocious results demands a new solution: the seventy-year old aid model should be scrapped and replaced with a focus towards capital markets and foreign investment. In fact, she says, aid—particularly large government-to-government aid transfers—is keeping Africa in a perpetual state of dependence and underdevelopment.

Moyo’s 2009 conversation is getting a bit dated, but her message remains relevant and was keenly prescient too. Relevant because the West continues to hold Africa to a different standard from the rest of the developing world, and prescient because China is the only major power willing to invest in Africa’s development.

When China was clawing from the ruins of Maoist communism, when the Berlin Wall fell, and when today’s Asian Tigers were recovering from devastating wars or beginning as newly freed but poor former British colonies, Western politicians and musicians weren’t clamoring for an aid tsunami. Instead the West encouraged Eastern Europe and Asia to tap into global capital markets and accept foreign investment to develop their own markets and commerce.

And China is investing in Africa today while the West continues to flood the continent with aid. China does not place human rights contingencies on its contributions and it expects a return on its investment—just as Western firms expected to profit from their investments in Singapore, South Korea, or Eastern Europe—but it’s actually building factories, infrastructure, and offering jobs to unskilled African laborers that pay many times the prevailing domestic wage.

Moyo differentiates between private emergency aid, which she views as a humanitarian stopgap measure, and enormous aid transfers from western governments to corrupt African ones—most of which winds up in African politicians’ overseas bank accounts after they’ve paid their armies and allotted a few crumbs to their people. Unfortunately her critics—most of whom haven’t read her book or closely examined her message—attack her for allegedly trying to eliminate all emergency aid when in fact she goes out of her way to specifically target government-to-government transfers.

Since writing her book “Dead Aid,” Moyo has branched out, writing about worldwide competition for natural resources and the decline of the Western welfare state. She serves on the Board of Directors for Chevron, Barclays, and formerly Barrick Gold and Seagate. But criticizing the debilitating effects of aid addiction put her on the map and ruffled the feathers of celebrities and aid champions like Bill Gates and her former teacher Jeffrey Sachs.