The Obama recovery: How does it compare to America’s previous post-crisis expansions?

10 MIN READ - The Cautious Optimism Correspondent for Economic Affairs and other Egghead Stuff grades former President Obama’s economic recovery on a bell curve against 225 years of other financial crises. You’ll feel like you’ve moved up the bell curve a little after enjoying this in-depth article. 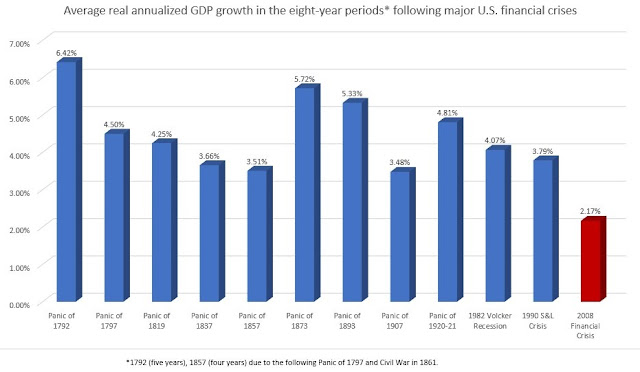 Former President Barack Obama recently re-entered the economic debate forum when he gave a speech taking credit for America’s greatly improved GDP numbers and employment performance of the last 18 months. Addressing the lackluster GDP and employment performance while he was in office, Obama reminded listeners once again that he inherited an economy just emerging from a financial crisis and in recession when he took office in 2009, but that his economic policies produced a strong recovery given the circumstances.

While there’s no question that Obama entered office right on the heels of a major financial crisis and inherited an economy in sharp recession, he wasn’t the first president to deal with such problems. The United States has suffered approximately 19 financial crises since George Washington assumed office in 1789, each followed by sharp recessions which were called “depressions” before economists changed their language after the Great Depression.

President Obama had a full eight years from 2009 to 2017 to oversee a post-crisis economic reconstruction, and both he and his supporters claim he took a difficult situation and engineered a miraculous recovery. But given what we know historically about how the economy rebounded from other financial crises, just how well does Obama’s miracle stack up?

Before we compare, it’s worth noting that defining a financial crisis is somewhat subjective, but economists generally agree that a crisis is characterized by widespread contraction of bank lending/credit, bank failures, in the pre-Fed era by widespread suspension of banknote/deposit redemption, and in the pre-WWII era by rapid price deflation.

If we measure the length of time required from the panic/crisis itself to the point where “full employment” is re-established (defined by most economists as a 5% unemployment rate or lower), the Obama recovery took exactly seven years. The crisis itself struck in September of 2008 and in September of 2015 the Bureau of Labor Services reported America’s official unemployment rate had finally fallen to 5.0%.

The longest recovery from a major crisis to full employment is undoubtedly the Great Depression. Unemployment peaked in the same year as the great 1933 crisis (at 25%) and full employment wasn’t reached until 1942 marking a nine year recovery. However in 1942 the military was in the process of drafting 12 million men to fight overseas so many economists don’t view voluntary full civilian employment materializing until 1946, thus concluding a thirteen year recovery.

Unemployment statistics before 1929 are very hard to pin down since the government didn’t begin collecting such data until the Great Depression. However economic historians such as Stanley Lebergott and Christina Romer have toiled for years trying to calculate estimates based on metrics like bank deposit records, government budgets, and payrolls in industrial centers.

The data conclude that after the Great Depression, the longest employment recoveries occurred during the depressions after the Panics of 1837 and 1893.

The Depression of 1893 is itself considered the second-worst slump in American history and was dubbed “The Great Depression” by Americans until the real Great Depression struck in 1929. Hundreds of banks failed (an enormous number for the 1890’s), foreign investors pulled their capital out of the country, unemployment reached 12.4% (Romer) after a second, smaller crisis struck in 1896, and the U.S. Treasury itself barely avoided bankruptcy with a bailout loan from J.P. Morgan.

And both the Depressions of 1837 and 1893 are estimated to have required seven years to restore full employment—the same as the Obama recovery. The Panic of 1873 technically required only six years.

Therefore, Obama’s 2008-2015 jobs recovery, when measuring time to full employment after a crisis, places in a three-way tie for second slowest in American history alongside the 1837-1844 and 1893-1900 recoveries.

Economic historians generally consider full employment recoveries to have been achieved in two to three years after most other pre-1929 panics. For example the Depression of 1920-21, which James Grant has appropriately dubbed “America’s last governmentally unmedicated depression,” is considered the second-worst downturn of the 20th century. All economic indicators fell faster in its first two quarters than in either 1929 or 2008, wholesale prices fell by 36.8%, and hundreds of banks failed.

President Warren Harding’s response was to do absolutely nothing aside from slash the federal budget by one-third. And yet from 1921 to 1923 the unemployment rate fell from a peak of 9% to 4.8% (Romer), full employment being achieved in just two years.

Keep in mind as well that in the modern era, unemployment has been measured using increasingly lax methods designed to understate the jobless rate by leaving out idle workers who have simply stopped filing claims and given up looking for work. By contrast pre-1929 unemployment rate estimates use positive statistics used to extrapolate numbers employed and considering all other labor force members as jobless. If both periods were measured using the same methodology, the Obama period would break out of its tie and claim second place for slowest recovery to full employment all to itself.

What about post-crisis GDP growth? Again, the government only began keeping records during the Great Depression, and again economists have worked for decades to estimate GDP levels going back to the nation’s founding. To properly correlate to Obama’s eight years in office we look here at GDP growth for the eight years following other post-crisis troughs after the Panics of 1797, 1819, 1837, 1873, 1893, 1907, 1920-21, 1990, and 2008. In every case GDP bottoms out in the year of the panic itself or at most the following year (1894, 1907, 2008). We only measure five years after the Panic of 1792 and four years after the Panic of 1857 because the former was followed by the Panic of 1797 and the latter was followed by the 1861 start of the Civil War.

We also include the post-1982 Volcker Recession which, although technically not a banking panic, did shake up the financial system, and also because the more recent 1982-1990 recovery during the Reagan era has been widely contrasted to the 2009-2017 Obama recovery. We exclude the Great Depression which is already acknowledged as the worst depression in American history and which we know places worse than the Obama era.

Based on the compiled GDP figures from the BLS after 1929 and Johnston/Williamston before 1929 (St. Johns University, University of Miami, Northwestern University) who gathered estimates from over a dozen economists including Nobel Laureate Simon Kuznets, Christina Romer, Robert Gordon, Charles Calomiris, et al. we calculate the following eight-year GDP growth rates in constant 2012 dollars:

After extrapolating these four, five, and eight year growth figures into average annualized GDP growth rates the final tally is:

Therefore the Obama recovery produced the worst post-crisis GDP growth rate in American history, even worse than the Great Depression.

It’s the only recovery that doesn’t achieve annualized growth rates in the mid-3% range or higher, and it even falls dramatically below that standard at a lethargic 2.17%. In fact, the average GDP growth rate of the eleven pre-2008 expansions is 4.50% or more than double that of the 2009-2017 recovery's 2.17%.

Some critics may argue that there are far too many differences between the 19th and early 21st centuries to compare GDP growth between the two. Aside from the fact that the Obama recovery also lagged far behind the very recent post-1982 and post-1991 recoveries, it is true that there are many differences in how government responded to crisis and depression in the pre-Great Depression era. Unfortunately they nearly all reflect even more poorly on the Obama administration.

The most glaring difference between the 19th and early 21st centuries is that before 1929 government countercyclical policies to “medicate” panics and depressions simply didn’t exist. Presidents and Congresses were virtually 100% laissez-faire in their approach when panics and depressions struck. The lack of policy instruments included, but was not limited to:

-No central bank to push down interest rates and engage in quantitative easing (exceptions: 1792 with Hamilton’s Bank of the United States and the 1920-21 Fed)

-No deposit insurance to induce depositors to leave their money in the bank and minimize failures.

-The gold standard limited policymakers’ ability to reinflate the money supply, not that anyone in government had yet thought of reinflating the money supply until Irving Fisher’s work on debt deflation in the 1930’s.

-No $9 trillion in Keynesian deficit spending. In fact, the federal government typically slashed the budget in depressions to compensate for falling tax revenues.

-No “Cash for Clunkers.”

-No bailouts for major auto companies or other industrials.

-No FOMC open market purchases of trillions of dollars in lousy mortgage-backed securities.

According to Obama’s economic advisers such as Christina Romer, Austin Goolsbee, Jared Bernstein, and Larry Summers, Democratic congressional leaders like Nancy Pelosi and Harry Reid, virtually all the major newspapers and their economic columnists like Paul Krugman and Matt O’Brien, and Obama himself, depressions/recessions in the pre-1929 era should have been worse—a lot worse—than the post-2008 recession.

Without all the stimulative magic potions administered by the Obama White House and the Federal Reserve, not only should pre-1929 depressions have taken much longer to reach full employment, they should have produced vastly inferior GDP recoveries and quite frankly each been a Great Depression in and of themselves. Instead they all dramatically outperformed the Obama recovery.

In fact, the only worse recovery in American history was the Great Depression, a slump where the Herbert Hoover and Franklin Roosevelt White Houses applied even more federal stimulus than the Obama administration.

Interesting, the two longest post-crisis unemployment slumps and the two worst GDP recoveries in American history also happened to be the same two where government intervened the most to promote recovery. By contrast every one of the over dozen pre-1929 post-crisis depressions received absolutely no federal government “help” and the leave-it-alone policy produced vastly superior recoveries.