2 MIN READ - The latest San Francisco self-inflicted absurdity from the Cautious Optimism Correspondent for Economic Affairs and Other Egghead Stuff. 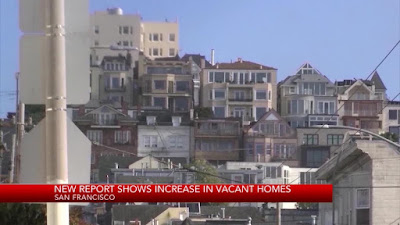 More bizarre consequences of San Francisco's 43 year-old rent control laws: a reported 60,000+ residential units sit vacant in a city of 850,000 while people struggle to find a place to live.

Landlords and investors pay through the nose for their rental properties in the City by the Bay. In a freer market when rents move against them - as they have with an exodus of residents during the pandemic - they still lease out their properties at lower rates because they know they can always raise rents back to profitable levels when the market improves. And during the slump "lower rent" is still better than zero rent.

But not with rent control.

If the landlord leases his unit at a depressed rate now, rent control laws lock in his tenant who then refuses to move out for decades (I know, I'm one of them as are nearly all my neighbors), the landlord only being allowed tiny annual rent increases approved by the rent control board.

Over the last 18 years those increases have averaged 1.1% per year while the market rent on my apartment has more than doubled, even including the recent downturn.

So when rents turn south landlords take their vacant units off the market, waiting for conditions to improve. You don't see tens of thousands of apartments deliberately held vacant in non-rent controlled cities like Dallas, Nashville, or Kansas City.

The economically illiterate local politician in the video, described on the city government website as "the first Democratic Socialist elected to the SF Board of Supervisors in over 40 years," tells landlords they are asking too much and need to lower their rents.

Thanks to the rent control laws that's exactly what they aren't going to do.

Once a tenant moves in paying depressed rents the landlord is stuck with that rate for all eternity even as he watches rents skyrocket all around him a few years later.

And to "solve" the problem voters are being asked to pass Proposition M next month which will tax any rental property that lies vacant for more than 182 days at $2,500 to $5,000 per year, with the penalty rising every year to a maximum of $20,000 annually.

Perhaps they should consider dropping rent control and allowing housing construction for once?

ps. The Economics Correspondent has written about the many wacky consequences of San Francisco's rent control law in more detail at...