ExxonMobil Paid More Than $1 Trillion in Taxes Over a Decade But Joe Biden Says "Start Paying Your Taxes!"

"Yes, in the eleven-year period FY2004 through FY2014, ExxonMobil paid literally over $1 trillion ($1.05T) in U.S. and international taxes, by far the largest single taxpayer in America." 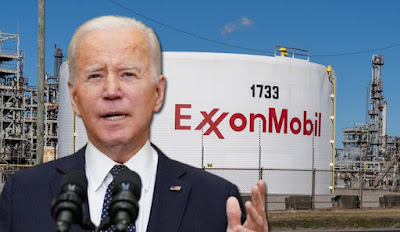 During a speech at the Port of Los Angeles Joe Biden recently blamed, once again, Big Oil and “corporate greed” for high gas prices and overall price inflation.

Calling out one company by name this time, Biden complained that “ExxonMobil made more money than God last year” and closed out his remarks by ordering the diversified energy supermajor to “start paying your taxes!”

This is of course just another of multiple salvos bashing America’s world-leading energy industry alongside a posse of Democratic politicians attacking Big Oil’s “record profits” to heat up the bloodthirst of their political base.

But the Economics Correspondent would like to ask two simple questions:

Q1. Have any of these politicians, Biden included, actually gone back and looked at oil companies’ past financials before accusing them of posting “record profits?”

Fortunately, the Economics Correspondent routinely accesses years’ worth of SEC-filed corporate 10-K financial reports, standardized accounting that any competent politician could look up with a Google search if they had the intelligence or principled honesty to bother.

Let's compare the rhetoric to the financial reality.

That $23.0 billion net profit was what remained after ExxonMobil first paid $62.5 billion in total taxes (income, sales-based, duties, and other taxes) for a final net profit margin of 8.0%.

But if ExxonMobil's final profit is “more money than God,” then several big tech firms must be “Supergods” in Biden’s book.

Here's how much net income some leading tech firms posted in 2021, plus their tax bills:

And again, for comparison purposes…

So why beat up on ExxonMobil but not Apple, Microsoft, Google, or Facebook—corporations that make far more money than ExxonMobil while paying a tiny fraction of the taxes?

Whether Biden leaves Big Tech alone because they’re his allies is partially speculation. What isn’t speculation is that many Democratic politicians have no clue how much these companies make and how much energy companies pay in taxes.

2) What about Big Oil’s “record profits?” We’ve been hearing that nonstop for the last several months.

“At a time of record profits, Big Oil is refusing to increase production to provide the American people some much needed relief at the gas pump.”

"While families are struggling to pay higher prices at the pump, oil and gas companies are recording record profits.”

“Giant oil corporations like @exxonmobil are making billions in record profits. We need a Windfall Profits Tax to tax big oil on their profits & we need to invest in clean energy too.”

There are countless more quotes but I’ll stop there. You get the idea. It’s common knowledge Democratic politicians have all synchronized to the “record profits” narrative.

So how about it? How big are Big Oil’s “record profits?”

Looking at corporate financials for the U.S. energy industry, we’ll just focus on what are, by far, America's two largest energy companies: ExxonMobil and ChevronTexaco.

Is that a record?

Here are some of ExxonMobil’s past annual profits, both nominal and (adjusted for inflation):

and as a reminder:

Well, that’s a decade’s worth of years when ExxonMobil made more, a lot more, than they made in 2021, all of it very recently for those Democratic politicians with amnesia.

Has ExxonMobil not been paying its taxes?

Here are some samples of taxes paid by ExxonMobil in previous years (total including sales-based taxes, corporate income taxes, and other taxes and duties):

Yes, in the eleven-year period FY2004 through FY2014, ExxonMobil paid literally over $1 trillion ($1.05T) in U.S. and international taxes, by far the largest single taxpayer in America.

During the same period, the bottom 70% of all U.S. taxpayers paid a total of $1.24 trillion in federal income taxes

Much of those payments are excise taxes and duties to other nations since ExxonMobil extracts, refines, and moves hundreds of millions of barrels of petroleum annually from/to other countries. But the company still paid over a trillion dollars out of their revenue streams to the treasuries of the U.S. and other international governments (and diverted away from shareholders) and paid as much in taxes as the bottom 65% of all American federal income taxpayers combined: about 86 million filers.

If that means ExxonMobil hasn’t “started paying your taxes,” I don’t know what Joe Biden’s definition of “start” is.  Maybe it’s the same as his definition for “start reading from your teleprompter!” or “start your cognitive decline!”

4) Lastly, what about ChevronTexaco?

By now you can see where this is going. Chevron’s net income in select previous years, nominal and (adjusted for inflation):

And again for comparison:

Incidentally, criticizing random San Francisco liberals may not be on the same level as quoting the President of the United States, but the Economics Correspondent lives in the City by the Bay and has lost count how many times he has heard or seen Bay Area liberals accuse ExxonMobil and ChevronTexaco of “paying zero tax.”

When I pointed out ExxonMobil had paid over $1 trillion in taxes from 2004 to 2014 and included URL links to their SEC-filed 10-K’s one commenter retorted “Next time include links to data that isn’t fake.”

Because... you know, the SEC is in bed with Big Oil: a joint-partnership enterprise to concoct fraudulent accounting from the offices of federal securities regulators.

But then it's always easy for progressives to live in taxes fantasyland when they’re not the ones paying.