Free vs Regulated Banking: The Second Bank of the United States and the Panic of 1819 (Part 1 of 2)

5 MIN READ - The Cautious Optimism Correspondent for Economic Affairs and Other Egghead Stuff focuses on yet more historical federal intervention into America’s banking affairs, this time with the nation’s second central bank, the abortive Second Bank of the United States which directly precipitated the Panic of 1819. 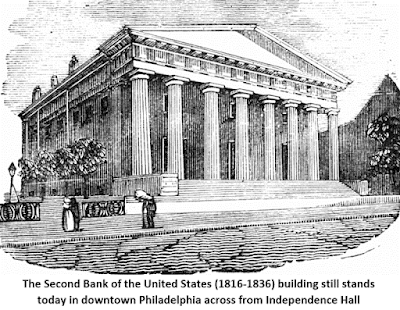 I. WAR OF 1812 FINANCE
America’s first central bank, Alexander Hamilton’s First Bank of the United States, only survived for twenty years. Having spawned the Panic and Recession of 1792 and the Panic and Depression of 1797, its charter renewal died in 1811 by a single U.S. House and single Senate vote.
One year later the United States declared war on Great Britain, opening the War of 1812.
From the standpoint of government finance, Congress’ declaration of war might be the worst case of bad timing in history.
By the 19th century major powers were financing wars with plentiful central bank credit. British Parliament had relied on the Bank of England to provide generous loans for over a century, and Napoleon had established the Bank of France in 1800 for the same purpose.
The Economics Correspondent is not saying he necessarily agrees with the arrangement of central banks making vast wartime credit available to the very governments that grant them special privileges, only that the United States entered the War of 1812 without the central bank that Congress had just shuttered a year prior.
Pressed to find credit from somewhere—anywhere—to fight the world’s most powerful army, the states and eventually the federal government resorted to private inflation by temporarily suspending the obligation of state banks to redeem their notes in silver or gold specie (i.e. going off the silver/gold standard, also known as the bimetallic standard).
Under the bimetallic standard, state-chartered private bank issuances of credit and paper banknotes were constrained by their stock of metallic reserves. If they overextended credit too many noteholders might demand banknote redemption at once and drain their silver/gold coin reserves (i.e. specie) leading to bankruptcy.
The bimetallic standard therefore acted as a market restraint on the amount of credit and paper money banks could issue, keeping inflation in check and preventing the formation of dangerous investment and speculation bubbles.
That all changed when the combined federal and state governments intervened and freed banks to renege on their contractual obligations to redeem notes in specie.
As intended, banks quickly went on a massive lending spree since, freed from the discipline of silver and gold, the more loans and paper banknotes they issued, the more interest and profits they could earn.

This was precisely the goal of Congress and the Madison administration: not only to free state banks to create vast amounts of credit and paper money, but also make much of it available to the Treasury for wartime financing, and with such a generous supply of credit available to lend it at favorable interest rates.
The strategy parallels Great Britain’s own when it suspended its gold standard in 1797 to fight Napoleon for the next eighteen years. The only difference was the British government received its credit from a single, closely connected and highly privileged central bank, the Bank of England, whereas the United States government would rely on America’s plethora of private state banks.
II. THE POSTWAR CENTRAL BANK
The War of 1812 ended with the Treaty of Ghent in early 1815, but the United States government was left with the problems of a large debt overhang and state banks which by then had printed far more paper money than they could back with gold and silver coin.
Congress was fully aware that going back on the bimetallic standard cold turkey could result in a large contraction of money and credit while placing enormous strain on the banking system. Hence debate reopened on the establishment of a central bank.
President Madison, who previously had opposed the First Bank of the United States' charter renewal, was convinced by Treasury Secretary Alexander J. Dallas of the necessity of a new central bank to facilitate the postwar transition from an unrestrained, highly inflated monetary system back to the more disciplined bimetallic standard.
Congress subsequently passed the charter establishing a second central bank, the Second Bank of the United States (SBUS), in April 1816. Headquartered again in Philadelphia, the SBUS opened its doors for business in January 1817 under President William Jones.
Like its predecessor, the First Bank of the United States, the SBUS would operate on a twenty-year charter requiring renewal by Congressional vote.
Like the First Bank, the SBUS raised its capital through a stock subscription. And like the First Bank, it subscribed one-fifth of its shares to the federal government who became a minority owner.
Just as the First Bank had done 25 years prior, the SBUS loaned the subscription capital to the U.S. Treasury and the loan was repaid through several years of SBUS stock dividends.
Like the First Bank, the SBUS acted as the Treasury's exclusive steward of federal deposits, giving it a “too big to fail” semblance as the public believed Congress would never allow its own bank of deposit to go bankrupt.
Like the First Bank, the SBUS would accept deposits from the public and also extend loans to private business.
Like the First Bank, the SBUS’s notes were accepted for payment of federal taxes, giving them a quasi-legal tender status.
And like the First Bank, the SBUS would be granted a monopoly by Congress: the exclusive right to open interstate branches and operate nationwide, giving it an outsized credit influence over any normal private bank.
Finally, as with the First Bank, subscribers to the SBUS’s stock offering would be allowed to purchase their shares with U.S. Treasury bonds, the objective being to support Treasuries prices while stuffing the Bank’s portfolio with government bonds. Treasuries interest payments to the Bank and its shareholders would come courtesy of the hapless U.S. taxpayer.
On a side note, the plan for the SBUS to accept Treasury bonds as payment for bank shares was no coincidence, nor was the appointment of Philadelphia attorney Alexander J. Dallas as Madison’s Treasury Secretary.
Dallas’ nomination was lobbied heavily by Philadelphia banker and merchant Stephen Girard, thought to be one of the two wealthiest men in America at the time.
Girard had personally bought the First Bank of the United States when its privileged national charter expired in 1811, and his now-private state bank served as the federal government’s largest creditor during the War of 1812.
Subsequently at war’s end Girard found himself with enormous holdings of U.S. government bonds and was looking for a reliable buyer.
Murray Rothbard, for 57 years the only economist to have dedicated a book solely to the Panic of 1819, explains Girard’s interest in the new national bank:
“During the War of 1812 Girard became a very heavy investor in the war debt of the federal government. Both as a prospective large [SBUS] stockholder and as a way to unload his public debt, Girard began to agitate for a new Bank of the United States."
"Dallas’s appointment as Treasury Secretary in 1814 was successfully engineered by Dallas and his close friend, wealthy New York merchant and fur trader John Jacob Astor, also a heavy investor in war debt [and the second of the two richest men in the country].”
We’ll continue with the story of how the SBUS produced the Panic and Depression of 1819 in Part 2.