Biden’s Stimulus Proposal: What’s In It and Where's It Going?

6 MIN READ - The Cautious Optimism Correspondent for Economic Affairs and Other Egghead Stuff wants to resist the temptation to bash anything Biden economics in the first contentious weeks and months of the White House transition. Here we take a look at the basics of his proposed $1.9 trillion stimulus. 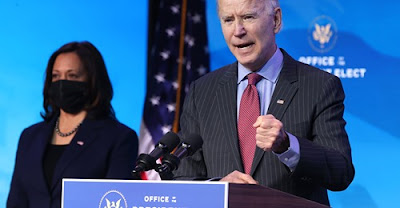 Biden’s Stimulus Proposal: What’s In It and Where's It Going?

Keeping in mind it first has to get through Congress (more on that in a moment), it contains:

-$160 billion for vaccine procurement and distribution

There was no mention of student debt forgiveness or tax hikes in the proposal.

1) The $1 trillion in direct assistance effectively adds to President Donald Trump’s December package (after Congress got through with it) that set aside $286 billion for $600 direct payments to households and $300 unemployment supplements.

The Biden plan adds another $1,400 in direct payments and $100 in unemployment supplements, raising the household payment to the same $2,000 Trump asked for.

It also expands payments to non-child dependents such as college students, the disabled, and one-immigrant parent households (likely legal and illegal both), increasing the price tag from roughly $700 billion were it proportional increases in Trump’s requested items to $1 trillion.

2) The $160 billion for vaccine distribution and $130 billion to help schools reopen are consistent with what Biden said he supported during his presidential debates. However given that slowdowns in vaccine distribution among states seems to be more the product of bureaucratic disorganization, the Economics Correspondent questions whether throwing more money at the problem will speed up immunizations any faster than simply cutting through the state-level red tape.

4) Among the more controversial elements, the $350 billion for state and local governments is being criticized as a bailout for profligate states and municipalities that were already in fiscal difficulty for years before Covid struck.

While the Economics Correspondent believes the package will ultimately serve to line the coffers of irresponsible state and local governments, $350 billion is hardly going to be enough to solve the enormous problems of their own creation.

California’s state and local government debts alone were estimated at $486 billion in 2019, *before* the Covid pandemic had even begun and surely over half a trillion by now.

The combined debts of California, New York, and Illinois exceeded $1 trillion in 2019 or 28.6% of all state/local debt nationwide for only 21.6% of the national population.

5) Finally the $15 per hour minimum wage will be the most controversial element of all and the Correspondent believes it will do nothing to promote recovery other than unemploy well over a million workers whose hourly marginal revenue productivity is less than $15 per hour but more than the current minimum wage in their state.

For example, if a young or inexperienced worker in Louisiana’s skills can only secure an additional $8 in revenue per hour worked, he/she will be gainfully employed at that state’s minimum wage of $7.25/hour.

However, if the federal government forces the minimum wage up to $15/hour the employer will lose $7 for every hour he/she continues to pay the same worker. The math will quite simply lead to job losses for what economists call low “marginal revenue product” workers referring to the marginal (additional) revenue the next employee hired can raise for the company.

Raising minimum wage above lower-skilled workers’ marginal revenue product explains, for example, why in 2017 when the Correspondent went to a California Panera Bread he had to use one of the eight kiosks at the ordering counter and most of the counter/cashier employees he had seen previously had disappeared.

It also explains why when the Correspondent visited Louisiana on a business trip shortly after he entered another Panera Bread where there were no kiosks whatsoever and a counter full of friendly employees waiting to take his order.

And restaurants and many other low-skilled labor businesses have been decimated by Covid and lockdowns. Driving their employee wages up to $15 per hour will have an even more damaging effect than in 2017 when the business climate was generally very good.

The Correspondent may write more about the economics of minimum wage (aka. wage floors) in the future.

Keep in mind these are all preliminary proposals by Biden and that the bill will have to run through Congress before getting to his desk by which point it may be dramatically altered.

And even after it passes, Biden has promised it’s only a “first step” in his administration’s plans to promote economic recovery.

On first glance the Biden package seems “moderate.” A lot of it is stuff Donald Trump asked for, only more of it, with a few added Democratic priorities: $350 billion for state/local governments, about $200 billion more in expanded assistance payments to non-child dependents and immigrants, and $130 billion for schools.

Removing the partisan items the price tag would be close to $1.2 trillion instead of $1.9 trillion.

But using 2009 as a guide, the Correspondent is not optimistic about prospects moving forward and thinks it’s only going to get worse from here. Because the package has to go through a Democratically controlled Congress full of radical members who want student debt forgiveness, a Green New Deal, universal basic income, socialized medicine, more regulations on business, and enormous tax hikes. And like 2009 they have a “never let a crisis go to waste” mentality.

It was truly a drug-induced fever-swamp gala of bipartisan spending.

Congressional Democrats will almost certainly try to raise the amount of aid to state and local governments above $350 billion. We know they will probably try to add tens of billions for student debt forgiveness and other woke initiatives. Who knows, The Squad may very well try to attach socialized medicine and the Green New Deal to the package.

And don’t forget tax hikes—probably the most likely demand of all. If there’s one thing that unifies the Democratic Party it’s their ceaseless infatuation with raising taxes and they will not miss the opportunity to strike while the iron is hot.

As for how it plays out politically, the Economic Correspondent sees two different paths: The first is Congressional Democrats balloon the tab to well over $2 trillion and Biden signs it, but puts on a public front of dutiful reluctance—something akin to “This bill is not perfect and I object [at least when the cameras are on] to all these wasteful provisions but I cannot in good conscience refuse to sign it and let Americans go hungry.”

The second is Biden cuts a deal whereby Congressional Democrats keep the package around the same size to appear as if he is in control of his party and exerting fiscal discipline, but only because he plans to approve all the other pork and pet projects in a Round 2 stimulus a few months later.

After all, he has already stated the $1.9 trillion package is only a “first step,” and all his party’s tax hikes, regulations, UBI, Green new Deal initiatives, student debt forgiveness, and other woke programs will define the second and third installments.

Hopefully it doesn’t turn out either way and future spending sprees stop right here. Unfortunately history gives us all good reason to be pessimistic, so let's hope for the best but prepare for the worst.