Inflation and Deflation Fallacies Part 6: “Cost-Push,” “Demand-Pull,” “Wage Pressures,” and a Host of Other Official Excuses for Inflation, Part 2 (wonkish)

6 MIN READ -  The Cautious Optimism Correspondent for Economic Affairs and Other Egghead Stuff at last wraps up his series on inflation and deflation fallacies with its most eggheady column saved for last. What about those complex counterarguments defending the government's position on the causes of inflation? 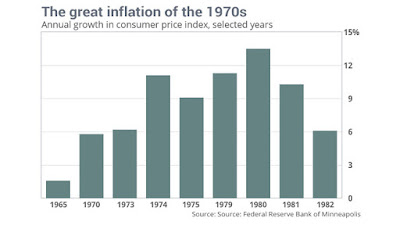 As we discussed in Part 1, most government-provided alibis for inflation (other than moneyprinting by the central bank) can be proven fallacious due to the following axiom derived from the Equation of Exchange:

***If consumers and firms are forced to spend more money on any one sector of the economy, they will necessarily have less money left over to spend on other sectors, and the subsequent fall in demand will tend to lower prices for other goods and services.***

In this final chapter we’ll look at some counterarguments to this axiom by proponents of the “cost-push” and “full employment wage pressures” theories.

To read more about "cost push" and "demand full" theories go to Part 1 at:

While this is rarely the case, the counter omits one very serious problem.

The only way all those consumers can have higher incomes is either a) the money supply has been inflated, b) monetary velocity has increased, or some combination of the two. In which case the true cause of the inflation is still not cost-push due to some more expensive commodity like oil, but rather those same old traditional causes to begin with: a larger money supply or higher velocity.

So the counterargument by its very logic places blame right back to the very culprit it's trying to exonerate.

2) “Yes, it’s true that ‘If consumers pay more for certain products they will have less money left over to buy other goods and services which will tend to fall in price.’ But as those prices fall, many firms will lose money or even go bankrupt resulting in lower output of their goods and services. So in the end the resulting fall in real GDP/output ultimately proves the cost-push inflation model.”

This one will take a little more time.

There is definitely a kernel of truth in this theory. If we use an extreme example, what if food prices were to rise fivefold instantly? A lot of consumers would be forced to set aside a huge portion of their budgets just to eat. Then car, leisure, apparel, electronics, jewelry, and other purchases would suffer horribly as would prices for all those products, ultimately leading to business failures and a lot less production in all those sectors. When production falls enough there are, in theory, the same number of dollars chasing fewer goods and voila, inflation—at least according to government economists.

The problem is where this scenario necessarily leads us. Namely, rapidly falling output is itself the definition of a recession—two consecutive quarters of it at least.

So if prices rise for 50 years straight, can the economy be in recession for 50 straight years? Of course not.

If inflation is climbing but real GDP is growing or at least stagnant then the “cost push leading to falling output” explanation is invalid.

That rules out the theory through at least 77%-85% of recent U.S. history.

Let’s take the famous stagflation era of the 1970’s for example, when government economists were blaming cost-push, wage pressures, the weather, and every other culprit they could find other than the central bank. The economy expanded in 31 of the decade’s 40 quarters (77.5%), yet prices were rising rapidly throughout the entire decade (see link, shaded areas denote recession).

So cost-push pressures can’t explain inflation for most of that lethargic decade, yet government economists were publicly blaming it the entire time.

Furthermore, during the 1980’s and 1990’s the economy was in expansion for 68 of 80 quarters (85%) and yet inflation was present all throughout—albeit at a lower pace. Again, cost-push simply has to be ruled out for most of that twenty year period.

The 2000’s and 2010’s fare even worse. The economy grew 69 out of 80 quarters (86.3%).
V. MAYBE ONCE IN THE LAST CENTURY: OIL COST-PUSH AND 1973-1974
So if we look back at the last century or so, the only place where we can find even a tiny sliver of potential validity to this “cost-push reduces output” alibi is a few quarters in 1973 and 1974: the OPEC oil embargo. The shock was so sudden and so great that oil prices did skyrocket rapidly and the U.S. concurrently fell into recession for five quarters. Prices rose by a shocking 15% in five quarters/fifteen months!
But hold on, can we really blame oil cost-push and falling output for that short episode?
Not so fast. A quick glance at what else was happening with the conventional causes of inflation at the same time takes quite a bit of air out of the theory yet again.
During the same period the money supply expanded by 5.9%.

When combined these two factors alone already produce a price inflation of 11.4% (1.069 x 1.052 = 1.114) over the same period. So there’s not much room at all for “cost push causes falling output” to explain what little inflation is left.
In order for 11.4% inflation to become 15.0% inflation, we need another 3.2% price increase (2.5% annually over five quarters) or 1.115 x 1.032 = 1.15.
So at the absolute maximum, the OPEC oil embargo cost-push resulting in lower output might have contributed 2.5% annual inflation for fifteen months. And how much of that output decline can be attributed to other factors such as…
-Richard Nixon’s wage controls
-The great bear market of 1973-74 serving as a drag on consumer and investment spending
-A concurrent capital gains tax increase, and
-A two year preceding series of interest rate hikes
…is impossible to say. But for government economists to blame a phenomenon that at most could explain 2.5% inflation, or as little as zero, during fifteen months out of the last century doesn't make for a very convincing theory.
Incidentally, prices rose by 112% (!) from beginning to end of the 1970's, so trying to pin it on a “cost-push” theory that can account for at most 2.5% annualized over fifteen months is indeed missing the forest for a fraction of a tree.
And finally since “stagflation” brought constant high employment with it, none of the decade’s inflation can be explained by full employment wage pressures (another form of theoretical “cost-push” inflation) since full employment was never reached during the entire ten years.
VI. SPOILER: AS ALWAYS IT WAS REALLY THE MONEY SUPPLY
OK, now that we’ve given the government economists their fair hearing, it’s time for a spoiler:
The entire decade-long 1970’s inflation was really caused by the Federal Reserve, which government economists did their best to divert public attention away from. The money supply for the decade measured by M1 rose by 87%...

And velocity also rose by 40.6% which is unsurprising. Because the worse inflation gets the faster people tend to spend, or in their minds “get rid of” their money since they know it loses more value the longer they hold onto it.

With the money supply growing that much faster than the real economy, it’s no wonder that from 1971—when the U.S. went off the last remaining vestige of the gold standard—to 1983, the dollar’s purchasing power fell to 38 cents.
Just to put that in perspective, if you retired with one million dollars in the bank to live off of, twelve years later it was worth $380,000, the difference eaten by inflation.
The 163% increase in prices was not caused by cost-push, demand-pull, or full employment wage pressure but simply by printing too much money.
Which brings us yet again to the real cause of inflation that nearly everyone already knows, but government economists never stop trying to conceal. Virtually all price inflation is caused by the central bank’s deliberate policy of creating money faster than real output. Or as Milton Friedman famously said:
“Inflation is always and everywhere a monetary phenomenon in the sense that it is and can be produced only by a more rapid increase in the quantity of money than in output.”
So whenever inflation picks up and economists and the media begin blaming cost-push, full employment, demand-pull, labor unions, greedy companies, or the weather, just go to the Federal Reserve’s own website to see if the money supply is growing or not.
Here’s a sample for the last sixty years that pretty much settles it. 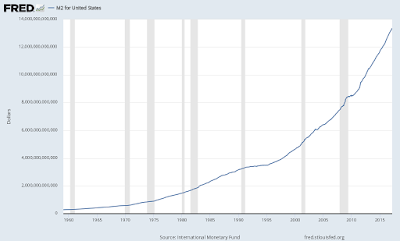 In the end it’s usually all about the money. Everything else is just a smokescreen.

ps. For those interested in learning more about debunking official government rationalizations for inflation the Correspondent highly recommends Henry Hazlitt’s 1960 classic “What You Should Know About Inflation” available free at the Ludwig Von Mises Institute website.

Hazlitt is an adherent of the Austrian School and not a Monetarist, therefore he doesn’t promote the role of velocity in inflation. Nevertheless his placement of primary blame on the central bank, the money supply, and particularly his masterful disparagement of official government “excuses” for inflation is a wonderful read.

Hazlitt is particularly skilled at writing in nontechnical terms for the noneconomist and delivering his message in short, easily digested chapters.