Inflation and Deflation Fallacies Part 5: "Cost-Push," "Demand-Pull," "Wage-Pressures," and a Host of Other Official Excuses for Inflation, Part 1 of 2

5 MIN READ - The Cautious Optimism Correspondent for Economic Affairs and Other Egghead Stuff nears the end of his series on inflation fallacies by tackling the steady feed of alibis governments and journalists offer the public every time prices start rising quickly. 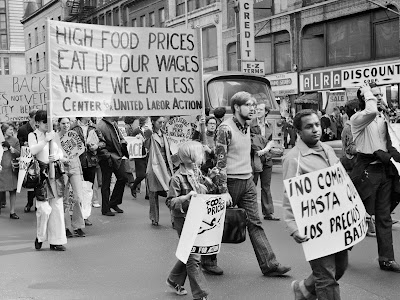 In this final two-part installment we will dispel a plethora of official and scholarly-sounding inflation excuses that are routinely repeated by government technocrats and the business press. The attached article is simply a corroboration of themes contained within this article.

I. WHAT REALLY DRIVES INFLATION

As we’ve discussed previously, the Equation of Exchange (mv = py) defines the only three drivers of price inflation:

Of these three, the most common by far is an expanding money supply.

For example, since the establishment of the Federal Reserve System in 1914 the money supply measured by M1 has increased approximately 31,500% (Wenzel, Federal Reserve) which goes a long way in explaining why prices are on average 2,500% higher now than they were a century ago. Yes, the dollar of 1914 is only worth about 3.8 cents today.

And finally plummeting output is, after two quarters, by definition a recession. However typical recessions only produce 1% or 2% declines in output with the steeper Great Recession of 2007-2009 slumping closer to 5% over 18 months or at a 3.4% annualized rate. Thus relentless, continuous high inflation is rarely the product of falling output itself.

So when inflation takes off, it’s virtually always due to increases in the money supply.

But whenever inflation “heats up” we begin to hear a litany of excuses—almost as if on automatic cue—flow from government agencies, Fed officials, and many economists that it’s due to anything but the central bank's creation of too much money. These alibis it turn are usually repeated uncritically within the news media.

And for those readers who are old enough to remember the 1970’s, you'll recognize most of these from the stagflation era of Richard Nixon, Gerald Ford, Jimmy Carter, and the first two years of the Ronald Reagan Administration.

Keep in mind when reading the government’s/media’s alternative inflation catalysts that the following axiom will always hold true if the money supply is indeed not being inflated:

***If consumers and firms are forced to spend more money on any one sector of the economy, they will necessarily have less money left over to spend on other sectors, and the subsequent fall in demand will tend to lower prices for other goods and services.***

1) “Cost-Push” Pressures. This is the most common cited today. The idea is a rising price for a major commodity—such as oil—makes every product that uses that commodity as an input more expensive. Since the higher cost of the input is passed through to final products, higher prices will spread throughout the entire economy therefore driving widespread inflation.

The implication, as usual, is that inflation is being caused by something other than the central bank’s constant money creation.

While it’s true higher oil prices will make gasoline, lubricants, plastics, chemicals, etc… more expensive to produce and transport, and that the cost of oil-based final goods will rise to varying degrees, this cannot cause a general price inflation because:

If consumers and firms are forced to spend more money on products that use oil as an input, they will necessarily have less money left over to buy other products which will tend to fall in price.

2) “Full Employment” Wage Pressures. This is just a variation on cost-push using a specific and common commodity: labor. The idea is if 5% or lower unemployment is reached, competition for workers will drive up wages and therefore the price of everything else.

One might wonder how it’s possible to escape buying anything that doesn’t have labor as an input and how prices couldn’t rise under full employment. While there are some products which are not at all labor-intensive (IT-based products and highly automated production where the initial capital investment has already been made), the difference could also come out of corporate cash reserves, debt issuances, or even profit margins.

Also wage pressures don’t apply equally in full employment. The wage for IT workers in a tech boom may rise due to an insufficient supply, but many union workers might keep the same wage due to long term contracts.

And the wage for higher paid chemical engineers may not go up much because there is no greater demand in that particular field and those workers’ skills may not allow them to easily jump to an alternative career that pays better. If a chemical engineer is unhappy that he hasn’t gotten a raise, will he really opt to flip burgers or become an orthopedic surgeon instead?

But the biggest problems with “full employment” wage pressures are first, the theory can’t even explain inflation during the majority of the time that the country is not at full employment (75% of the last fifty years)…

…and even when the country is at full employment the empirical evidence has still not supported the theory.

The U.S. was operating at full employment from late 2015 until the outbreak of Covid in March of 2020. During most of the Trump presidency the unemployment rate was below 5%, even down to 3.5% in late 2019, and yet there was no major inflationary event, nor was the Federal Reserve inclined to raise interest rates to counter inflation. In fact, all that time Fed officials and Keynesian economists were complaining that 1% or 1.5% inflation wasn’t high enough!

There was also full employment during the last four years of the Clinton administration and no inflationary event, although the Federal Reserve did raise interest rates at the very end to stem the record dot-com stock market tech bubble.

Why no full-employment generated inflation problem? There are several reasons.

-Moreover, even at full employment new workers can still be hired who were previously outside the labor force (as we saw in the first three years of the Trump administration) which also boosts inflation-offsetting output gains.

-And as wages rise firms divert budgets away from workers and into labor-saving capital tools and machines resulting in rising output with the same quantity of labor employed (ie. higher productivity), although this process admittedly takes time.

3) “Demand-Pull” Pressures. This theory has fallen out of favor somewhat since the postwar decades. The idea is if there is a sudden positive demand shock for a certain commodity or product, the higher market price will spark rising inflation.

So let’s say consumers go crazy for a new iPhone because it can actually wash your clothes, do your taxes, and run your errands for you. If people are suddenly willing to pay double the previous price for iPhones the theory states the consequence will be higher inflation.

But once again, if consumers are in this case willing to pay a lot more for the new iPhone, they will necessarily have less money left over to buy other goods and services which will tend to fall in price.

4) Finally there’s the basket of miscellaneous excuses used throughout the 1970’s such as labor unions driving up the cost of their members’ wages. Or greedy businessmen who raise prices to boost their profits. There have even been attempts to blame bad weather for inflation pressures.

Assuming any of these occur, as soon as consumers are forced to pay for more expensive products resulting from higher union pay, greedy businessmen, or bad weather they will necessarily have less money left over to buy other goods and services which will tend to fall in price.

UNLESS the central bank expands the money supply. In that case not only will consumers pay more for oil-based products, labor-intensive products, or a space age iPhone, but they'll also have enough new money left over to pay more for everything else.

Which leads us to the real problem.

III. MONEY IS THE REAL PROBLEM

All the alibis of cost-push, wage-pressure, and demand-pull seem like rearranging deck chairs on the Titanic when placed next to the real culprit: a 31,500% increase in the money supply since 1914.

Looking at any decade period or even a few years shows the same pattern: where there’s inflation, the money supply is growing faster than output. Check out the high inflation 1970's, the decade when government economists were peddling all those theories at once:

And as if that isn’t enough to settle the matter, there’s one last important piece of empirical evidence refuting all these fictional inflation hobgoblins.

The phenomena of “cost-push,” “demand-pull,” “full employment wage pressure,” greedy businessmen, bad weather, and even some labor unions also existed during the entire pre-Fed era of 1792-1914, when the U.S. money supply was constrained by the bimetallic and classical gold standards. Yet over those 122 years prices actually fell every year on average. The only difference between then and now is the money supply grows much more rapidly today under our monopoly central bank’s fiat money regime.

We’ll wrap up inflation fallacies in the next and final chapter where we’ll dive deeper into a few of the more sophisticated counterarguments by those who contend the claim that “consumers will have less money to spend on other products” is an invalid criticism of their own cost-push theories.