5 MIN READ - The Cautious Optimism Correspondent for Economic Affairs and Other Egghead Stuff has already set an analysis of inflation in motion with his recent series on the Fed’s 2020 coronavirus easing programs. Hence the decision to strike while the iron is hot and continue with an examination of longstanding inflation fallacies. 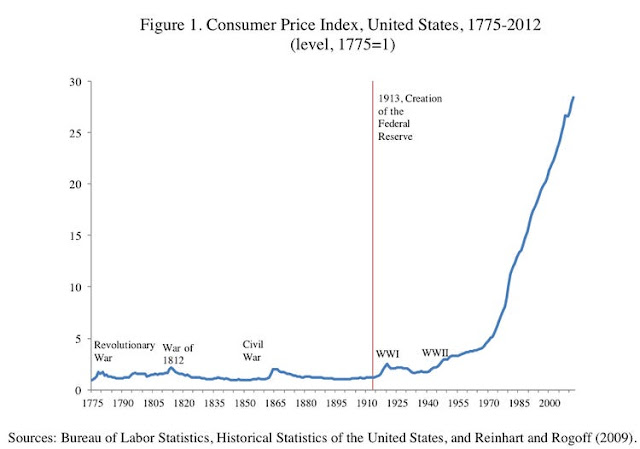 In previous articles we’ve employed the century-old Equation of Exchange to establish the primary factors that raise prices: money supply, output, and velocity.

For those not familiar with the Equation of Exchange (mv = py), the Economics Correspondent recommends his April summary of the subject at:

-First and foremost, an increase in the money supply as measured by M1 or the broader aggregate of M2.

-Second, falling output or the same number of dollars chasing a declining quantity of goods and services.

-And third, rising velocity—a more rapid turnover of dollars spurred usually by more bank lending or a greater propensity to spend and reduced propensity to hoard by businesses and consumers.

However during a normal economic expansion, output doesn’t decline. It rises. So blaming inflation on higher economic output is a blind alley.

And during expansions it’s possible that economic actors may be more willing to spend and banks more willing to lend, but changes in velocity tend to be moderated during normal times. Velocity typically plunges only during economic crises, and only soars during hyperinflations when actors try to spend their money quickly before it loses purchasing power.

So during normal expansions, the culprit driving higher prices is nearly always an expansion of the money supply.

As the Economic Correspondent has previously written, the money supply has grown by leaps and bounds over the last four months, but the last four months have been anything but a normal expansion. Monetary velocity has contracted as is typical during a major crisis or recession.

So during more normal economic times, politicians and central bankers may try to blame rising prices on an “overheating economy,” or greedy businessmen, labor unions, the weather, a tight job market, “cost push” or “demand pull” inflation pressures, but the true source is nearly always the central bank and the commercial banks it influences through the manipulation of interest rates.

Let’s see how understanding the monetary roots of inflation during economic expansions helps deconstruct the many inflationary fallacies circulated by government officials, the press, and central bankers. Starting with…

I. “AN OVERHEATING ECONOMY”

This fallacy is repeated on a near daily basis in the press during periods of growth: “If the economy grows too rapidly inflation will spiral out of control.”

The contention is obviously thwarted by theory. The more rapidly y (output) grows, the faster p (prices) will fall—all other things being equal.

As the Equation of Exchange tells us, prices move inversely to output. So if an economy with a money supply of $100 produces 100 widgets each year—assuming consumers want to buy all 100 widgets—the average price of widgets will tend towards $1. However if the following year the economy produces 110 widgets but the money supply remains $100, the price of widgets will fall to 91 cents. ie. The same number of dollars chasing more goods and services.

But not only is the allegation of the “overheating economy” contradicted by monetary theory, American history is rich with evidence of the precise opposite. Although Americans of the last 90 years have only known rising prices, the pre-Great Depression era offers a century-plus empirical exhibit of rapid economic growth alongside *falling* prices.

The Golden Age of America’s economic history is widely considered the Gilded Age, roughly 1865-1914 or the half century from the end of the Civil War to the beginning of World War I (1914 coinciding incidentally with the establishment of the Federal Reserve). That fifty year period contains two of America’s greatest decades of economic growth and the United States emerged as the world’s largest economy in the 1880’s.

Given that the U.S economy grew to seven times its size from 1866-1913 vs only 3.5 times its size from 1972-2019, one would expect the Gilded Age to be a period of runaway hyperinflation—if we listen to the business news, government policymakers, and liberal economists. After all, every time GDP growth touches 3% we’re warned that unless the Fed acts uncontrollable inflation is right around the corner, so a near half-century of 4.2% growth with no Fed must have been a hyperinflationary disaster, right?

The historical record is again consistent with the Equation of Exchange. Under the classical gold standard, and with no Fed to push monetary expansion to its limits, U.S. money supply growth was limited roughly to the pace of new gold mining discoveries plus the balance of international payments. But as the growth of goods and services outstripped the growth of money, y (output) outgrew m (money supply) and the result was gently falling prices.

That’s nearly fifty years of evidence debunking the presumption that “too much economic growth sparks inflation.”

In fact, the evidence goes back even further. If we measure economic growth and prices from 1800 to the eve of the creation of the Fed (113 years), American GDP grew 9,800% or 4.0% per year for over a century. Again, government officials and Fed economists would have us believe the entire 19th century must have been an economic quagmire of hyperinflation since the economy must have been “overheating” virtually the entire time.

The same trends can be seen throughout the Industrial Revolution and Second Industrial Revolution in Great Britain: rapidly rising output and living standards with gently falling prices as the expansion of gold or silver-based money was unable to keep pace with the growth in goods and services. The rest of Europe and Canada, effectively the entire industrialized world—reflect the same experience.

The only interruptions were periods when governments suspended the gold standard—usually wars such as the War of 1812, American Civil War, or the Napoleonic Wars. But when peacetime and the gold standard returned, prices resumed their decline and across the entire 150 year period from the dawn of the Industrial Revolution to World War I prices fell across the board.

It was only when central banks were established and particularly western governments ended the domestic gold standard (1931-1935) that the era of uninterrupted price inflation—that people are so used to today—began. Beginning in the depths of the Great Depression, central banks launched a deliberate policy of producing money faster than the real economy grows, thus driving prices relentlessly and permanently upwards. In a dramatic reversal of the price level, what cost $1 in 1933 costs a little over $20 today.

We’ll continue examining numerous other inflation fallacies in Part 2.
Posted by CDS at 12:00 AM