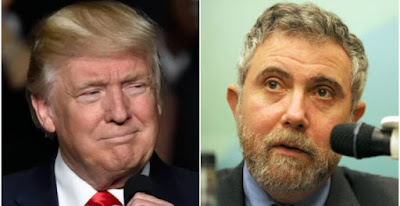 1 MIN READ - The Cautious Optimism Economics Correspondent is more than amused by Nobel laureate Paul Krugman's take on tariff wars with China... back in 2010 when a different person and party occupied the White House. Whatever your opinion on the tariff, Krugman is a reminder that your views too can always "evolve" whenever the presidency does.
___________

Krugman: "Tensions are rising over Chinese economic policy, and rightly so: China’s policy of keeping its currency, the renminbi, undervalued has become a significant drag on global economic recovery. Something must be done...."

"..But if sweet reason won’t work, what’s the alternative? In 1971 the United States dealt with a similar but much less severe problem of foreign undervaluation by imposing a temporary 10 percent surcharge on imports, which was removed a few months later after Germany, Japan and other nations raised the dollar value of their currencies. At this point, it’s hard to see China changing its policies unless faced with the threat of similar action — except that this time the surcharge would have to be much larger, say 25 percent."

"I don’t propose this turn to policy hardball lightly. But Chinese currency policy is adding materially to the world’s economic problems at a time when those problems are already very severe. It’s time to take a stand."

Krugman's "retaliatory tariffs are a great idea when Trump isn't President" column can be read at: