A Primer on Reserve Currencies (Part 2 of 4): How Does the Global Reserve Dollar Benefit the United States?

5 MIN READ - Enjoying global reserve currency status endows many benefits upon the issuing country. Although some advantages are political—for example overseas dollar reserves held in largely U.S. assets are easier for the federal government to freeze as a form of punitive sanctions—this column focuses solely on economic advantages. 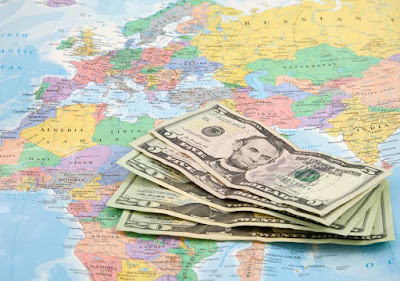 BENEFITS FOR THE UNITED STATES

1) First among many, the U.S. banking system enjoys conveniences that give it a cost advantage against its international competitors.

U.S. banks take deposits in dollars and make loans in dollars. Therefore there is no uncertainty about returns on lending other than interest rates and creditworthiness of borrowers. However overseas banks that wish to make loans to firms conducting international business have to lend in dollars even though they take most of their deposits in their own domestic currencies.

Using, say Sumitomo Bank of Japan as an example, Sumitomo takes its deposits overwhelmingly in yen. But it must lend extensively in dollars for its corporate borrowers who do business overseas, or domestic firms who must use dollars to buy imported commodities or inputs for manufacturing goods. Thus Sumitomo has to convert large yen balances to dollars, a service which doesn’t come free, and when dollar loans are repaid the same costs are outlayed to convert back to yen. So Sumitomo and international banks in general incur currency conversion costs that U.S. banks don’t.

2) Also, once Sumitomo issues dollar-denominated loans it has to worry about yen/dollar exchange movements. If the dollar weakens dramatically against the yen after the loan is issued, Sumitomo might be fully repaid with interest in dollars, but upon converting back to yen the bank still loses money on the transaction.

3) Then there’s the benefit for exporters. U.S. exporters pay their expenses in dollars and sell their goods in dollars. While they are cognizant of exchange rate movements in the overseas markets they sell to, they don’t have to constantly reprice their exports and need only worry about changes in demand for their exports when exchange rates move. But foreign exporters incur costs in their domestic currency and then price their goods on the world market in dollars. Thus dollar movements against their currency more directly affect their revenues when converted back to that domestic currency (unlike U.S. firms which service costs and collect revenues both in dollars).

4) The reserve dollar gives America cheaper access to credit. Since central banks and governments around the world hold large balances of U.S. dollars and want to “park” them somewhere to earn interest they overwhelmingly find their way into U.S. credit markets. With the higher supply of loanable funds available U.S. borrowers enjoy lower interest rates than borrowers of other countries.

The largest beneficiary is of course Uncle Sam who’s the world’s largest debtor. Treasury securities are extremely popular with foreign holders of dollars, and the federal government pays lower interest rates than it otherwise would due to simple supply and demand. The demand for U.S. debt is proportionally higher than the sovereign debt of other countries due to such large overseas dollar holdings.

In fact the global reserve dollar explains a great deal of why the United States runs an investment income surplus of about $212 billion annually (Griswold: 2015). Despite the fact that foreigners hold about $28 trillion in U.S. assets while Americans hold less, only $23 trillion in overseas assets, America still earns $212 billion more a year on its assets because the dollar’s global reserve status indirectly allows America to pay foreigners a lower interest rate.

5) Finally the largest benefit of all is simply “free stuff.” As of 2018 approximately $6.2 trillion in U.S. dollars are held in reserve by overseas institutions—mostly central banks—and the only supplier of dollars is the U.S. Federal Reserve.

However the world economy is growing every year. International trade is growing every year. Every government in the world is engaged in some sort of monetary inflation. Result? The world’s appetite for reserve dollars grows with each passing year too. That is, the United States has to export approximately $250 billion a year overseas just to keep the gears of world trade well-oiled and thus maintain the dollar’s reserve status.

Generally speaking, there are three ways for $250 billion in new dollars to find their way overseas. First, the U.S. could print the money and just give it away as a gift. Obviously that’s not going to happen.

Second, the U.S. can buy overseas assets with dollars and a trade takes place: U.S. investors gain tangible overseas assets and those countries receive the dollars they need. And this process does play out to some extent every day.

But third (and most common), why give away $250 billion a year or put it all into overseas assets when you can trade it for all kinds of cool stuff, i.e. imports? This is the primary means by which the U.S. exports dollars to the world: by running a trade deficit. The U.S. prints money virtually cost free and in exchange U.S. consumers get almost $250 billion in real goods and services that our trading partners have to work hard and incur major costs to provide us. It’s a windfall for America's standard of living since the figurative paper dollars the U.S. hands foreigners in return cost almost nothing to produce (ie. seigniorage benefits).

Only a country with a global reserve currency can enjoy such a privilege.

If Malaysia buys cool imports from Australia with U.S. dollars, Malaysians still had to pony up real goods and services to acquire those dollars to begin with. But if Malaysia somehow pays for Australian imports with ringgits, Australian firms and central banks aren’t going to simply hold those ringgits because ringgits aren’t a widely accepted reserve currency. They will turn around and quickly use them to buy real imports or assets from Malaysia. That is, both countries’ currency imports are ultimately financed with real goods and services that they have to produce—a symmetric trade relationship.

This is not the case with the United States which, like Malaysia and Australia, produces its currency at virtually no cost, but unlike other countries enjoys reserve currency status. Thus once American dollars are exchanged for imports approximately $6.2 trillion of those dollars sit in reserve at foreign central banks and don’t demand exported U.S. goods and services in return. It’s about as close to a free lunch as a country can get.

All the benefits that the United States enjoys for issuing the global reserve currency don’t go unnoticed by our trading partners. The nations of the world are fully aware that U.S. banks have lower costs, less uncertainty, that U.S. credit markets enjoy lower borrowing costs, and U.S. consumers enjoy a higher standard of living—all at their expense, simply by being the issuer of the dollar.

If we tally up a rough estimate, the U.S. global reserve dollar bestows over half a trillion dollars in benefits annually upon the American economy:

-At least tens of billions of dollars in savings for U.S. banks and exporters who don’t incur hedging, currency conversion, and exchange rate administration costs

Even after de Gaulle’s death, the French plotted constantly to find some way to dethrone the dollar. In the 1980’s Francois Mitterrand and his finance planners approached German Chancellor Helmut Kohl with a proposal to unify the continent’s separate currencies into a single “euro” to counter the U.S. dollar. Germany agreed, mostly out of guilt for damages it had inflicted during World War II, and the rest is history—although the U.K. (Great Britain minus Ireland) wisely opted to retain its own currency, the pound sterling.

Europe hoped to enjoy the same benefits (banking, currency exchange/hedging) with the single euro currency across its multiple nation-states that the U.S. enjoys across its 50 states. And the strategy was the more countries on the euro, the better. The larger the economic zone and the more euros produced and circulating, the more attractive the euro would look to foreign central banks as an alternative to the dollar. Europe hoped it could at last enjoy its share of “free stuff” (ie. imports) and lower borrowing costs, largely at the dollar’s expense.

Although the euro has since succeeded in saving European banks, exporters, and consumers billions in transaction costs with other euro member countries, the “more the merrier” philosophy unfortunately backfired when periphery nations such as Greece, Portugal, and even Spain and Italy were added to the currency zone. When those countries’ fiscal crises struck in 2011, global confidence in the euro sagged and the strain also sparked nationalist and political infighting between the responsible northern countries and their profligate Mediterranean neighbors.

Nevertheless European policymakers still hope that one day the euro will become a real rival to the dollar and muscle in on the reserve currency “exorbitant privilege” that has been largely enjoyed by the dollar and the United States for the last 75 years.

In Part 3 and 4 we’ll discuss predictions of the demise of the global reserve dollar and why the U.S. dollar is unlikely to lose that status anytime soon.
Posted by CDS at 12:00 AM