The Economics of Healthcare in America #3: Why Are Pre-Existing Conditions Even a Problem? (Part 3 of 4)

5 MIN READ - Due to recent developments in healthcare legislation, the Cautious Optimism Correspondent for Economic Affairs and Other Egghead Stuff extends his installment on healthcare pre-existing conditions from three articles to four. 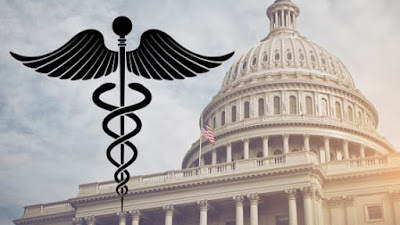 If Part 1 of this healthcare installment we discussed why pre-existing conditions were never an issue in America until FDR’s employer tax-credit executive order of 1943. In Part 2 we discussed two flawed and unworkable proposals to untie the employer-health insurance pre-existing conditions problem: granting the same tax-exempt status to individual insurance purchases and repealing the employer tax-credit entirely.

The Economics Correspondent recommends reviewing those articles at:

Now we discuss the best policy recommendation for reversing the pre-existing conditions problem that the 1943 employer health insurance tax credit created 77 years ago.

A third and very inventive/positive solution that has been promoted by free-market think tanks like CATO and the American Enterprise Institute for years reverses the dependency on employers for health insurance while avoiding the political fallout of passing huge costs onto workers.

The proposal retains the employer’s tax credit, but not for buying health insurance per se. Rather, employers would receive a tax credit for simply using the dollars they normally pay for employee health plans and depositing them into revised employee Health Savings Accounts called Health Reimbursement Arrangements (HRA's). Employee HRA’s would be individually owned and divorced completely from the workplace, other than whatever dollars were added to it. Americans in fact, not just “employees,” would own this account for effectively their entire careers, and even adult lives, no matter who they work for or even if they don’t work at all.

With dollars in the HRA, workers could pay first and foremost for health insurance premiums, but also for other medical expenses such as insurance deductibles, copayments, or qualifying medicines, devices, etc. In fact the HRA would work very much like the HSA/FSA does today, but with a few crucial differences. Those differences, again, being:

-Insurance premiums could be paid with HRA dollars (today, with very few exceptions, they can’t)

With this arrangement, workers would no longer get whatever insurance plan their employer hands down to them, but rather pay for whatever plan they find on the individual market that works best for them—using their employer’s contributions to pay for it.

In fact, after many years the U.S. workforce would settle into owning health plans purchased on the open market *long before* going to work for a new company. Americans would shop from the virtually limitless number and variety of plans available on the market, choose the one that strikes the best balance of affordability and benefits, and then the employer would simply provide the dollars to help pay for that same plan’s premium—hence, total continuity in coverage regardless of employment status while retaining the workplace benefit.

If the employee wanted to quit and work somewhere else, there would be no continuity problem. They would keep the same plan they had before their most recent job and the job before that—ie. true uninterruptible portability. The only thing that would change is who is providing the dollars to help the employee pay for it.

Uninterruptible coverage for workers who voluntarily change companies would also end the common phenomenon of workers being “trapped” in their jobs for fear of losing their health benefits. Employees would be unchained—free to work wherever they please without a care in the world about health insurance plans since employers would no longer be providing them, only the dollars to help subsidize the employee’s already established individual plan.

Under this HRA proposal if the employee got seriously sick, started insurance-paid treatment, and then suddenly lost their job there would also be no problem (other than continuing to pay premiums—more on that in a moment). He/she still owns the same plan which continues to pay their medical bills throughout regardless of who they work for. The insurer doesn’t know and doesn’t care what the worker’s job status is so long as they keep paying the premiums—just like car insurance or home insurance.

If the worker is hired by another company two months later, again no problem. They still have the same policy that is still paying for their treatment and won’t reject them due to “pre-existing conditions” since it’s the same insurer throughout the entire process.

In other words, health insurance would work a lot like car insurance, which companies have never received a tax credit for providing and thus never given to employees. People stay with the same auto insurer for years, even decades sometimes, as they go through five or six jobs. Likewise they would stay with the same health insurer through five or six jobs. If the worker wants to switch to another insurer, they’re free to do so. But if they’re in the middle of a major illness they are obviously going to do the smart thing and stick with their current plan. After all, when a house is heavily damaged no one drops their homeowners insurance at the very moment their insurer is paying for repairs either.

For the proposal to work smoothly there would have to be a few other rules to iron out potential loopholes.

But expensive plans usually offer very low deductibles or copayments which experience has repeatedly shown leads to massive overconsumption of medical services—particularly discretionary medical services—since the patient feels little financial consequence out of their own pocket (the “what do I care, someone else is paying” malady).

But by presupposing “use it or lose it” provisions and allowing leftover dollars to roll over into the following year, workers would shop around and look for the plan that works best for them at the lowest price (ie. competition at the consumer level). Besides, they know if they lose their job they will want to hang onto a plan that they can still afford during brief periods unemployment, hence not load up on the most expensive plan possible just to burn through dollars before the end of the year.

-Another benefit of allowing end-of-year balances to be carried over to the following year: Over time individuals can build HRA “cushions” as a reserve in case they lose their job one day and need money to continue paying their premiums until they find another employer. In the event of a major illness, a rollover reserve cushion could also provide the funding to pay out one’s deductible in full, even over several years if the illness requires long-term treatment.

Many years of accumulated rollover dollars could serve as a reserve for when the policyholder enters their senior years and insurance premiums rise to reflect greater health risk. The reserve could even earn interest on pre-approved safe investment instruments much like term-life insurance plans grow in value over time.

-Since HRA dollars must be spent only on health insurance and medical expenses, there would be no temptation to “blow” the money on extravagances like a vacation cruise or a new car. But since the HRA balance is still the accountholder’s money (viewed as “my money”) individuals would have more incentive to conserve their balances instead of simply looking for ways to spend the funds on nonurgent/unnecessary medical consumption.

-Finally, the HRA dollars method would allow small businesses that currently can’t afford to provide worker health insurance a tax credit for making a partial contribution. Today, the standard for qualifying for the tax credit is offer your employees a plan. However if a small business feels it can only afford to contribute partially to a plan it receives no tax benefit. However with an HRA a business can at least “get in the game” by contributing whatever amount it can afford and filing the contribution as a deduction. That way workers can at least get partial financial assistance from the workplace that employers currently have no incentive to give.

This proposal is the most innovative the Economics Correspondent has seen yet for untying the garbled mess that FDR's employer-paid health insurance (which most policy analysts have called "an insane way to cover Americans") executive order created during World War II.

However it's hardly a new idea. Think tank analysts who oppose big government screwing up medicine even more than it already has have been aware of this idea for at least two decades, but in the past no major Washington politician has had the economic insight or political courage to propose it.