A Quick Footnote: Friedman and Schwartz on Gold Inflows in the Early 1930's

1 MIN READ - From the Cautious Optimism Correspondent for Economic Affairs and other Egghead Stuff... to those who have followed his series on the Federal Reserve System and monetary policy during the Great Depression: 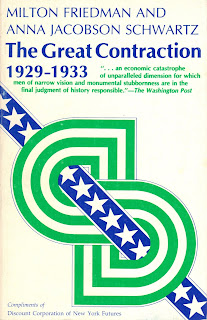 A beautiful summary from Friedman and Schwartz on the effects of sterilization of gold inflows by the Federal Reserve in the early 1930's:

"The international effects [of deflation] were severe and the transmission rapid, not only because the gold-exchange standard had rendered the international financial system more vulnerable to disturbances, but also because the United States did not follow the gold-standard rules. We did not permit the inflow of gold to expand the U.S. money stock. We not only sterilized it, we went much further. Our money stock moved perversely, going down as the gold stock went up... ... The result was that other countries not only had to bear the whole burden of adjustment [due to suppression of the Hume Price-Specie Flow Mechanism that would normally allow international prices to readjust upwards] but also were faced with continued disturbances in the same direction, to which they had to adjust. As [New York Fed Governor George] Harrison noted in early 1931, foreign commentators were particularly critical of the monetary policy of the United States..."

Yet 56 years later modern Neoclassical and Keynesian economists and historians continue to blame "the gold standard," not interference in its automatic workings by central banks, for the tragic 1930's deflation.

"The interwar period shows us a case where central banks—not the gold standard—ran the show.”

The Economics Correspondent's detailed and running series on Federal Reserve policy during the early 1930's can be read at: