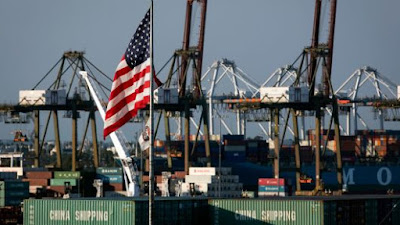 
The CO Correspondent for Economic Affairs (COCEA) would first like to say that he believes China does use underhanded and mercantilist tactics to boost its exports including foreign currency exchange interventions, import quotas, and theft of intellectual property.

The COCEA also believes the Chinese Communist Party uses these tactics to maximize domestic employment out of fear that it could be overthrown politically should it cease to deliver the economic goods to China’s 1.3 billion citizens.

Since China alone represents the disproportional bulk of America's merchandise balance deficit, removing China from the calculus leaves the rest of the collective globe in a near-equilibrium position with the United States.

But the highly-publicized "$739 billion trade deficit" is an incomplete and ultimately deceitful statistic meant to alarm Americans into believing the world is "ripping us off." In fact, with the exception of remittances, the big-picture U.S. “balance of trade deficit” is very close to zero.

Let's explain using available statistics from the 2011-2015 period in Daniel Griswold’s recent Mercatus paper, themselves taken from the BEA and Commerce Department.

The $739 billion merchandise trade deficit that is reported in the news refers only to goods. These can be manufactured such as cars, televisions, clothing, etc... or goods that don't come from factories like agriculture or media.

However what isn't included in the $739 billion figure—just for starters—is the American services account surplus.

Normally when people think of services burger flipping jobs come to mind, but in the theater of global trade the U.S. exports finely tuned professional services in finance, consulting, architecture, design, and engineering as well as education or travel.

For example, if a foreign student comes to the United States and pays tuition at a university, he helps America run a service account surplus. If an overseas tourist flies to the United States to visit the Grand Canyon or New York City and spends money with hotels and tour companies, he helps America run a service account surplus—especially if he flies a U.S. airline.

And the kinds of jobs that U.S. workers perform exporting services are generally higher-skilled and higher-paying than manufacturing jobs. In other words, services jobs are precisely the kind of jobs we want in America if we are to maintain a high standard of living that the rest of the world is willing to pay us handsomely for.

Hence it's no coincidence that as a nation gets richer, more and more of its jobs move to the service sector—because the world is simply unwilling to pay the big bucks just for manufactured products. The USA runs an approximate $232 billion services account surplus with the world because we're very good at what we do.

***So the first amendment to the $739 billion merchandise trade deficit is to adjust for America’s $232 billion services account surplus. The “trade deficit” is now whittled down to $507 billion.
_______

All these assets earn investment income which flows in both directions. But the U.S. consistently earns more income on its overseas assets than foreigners earn on U.S. assets—about $212 billion more every year.

Why? Is it because U.S. citizens and institutions are smarter or more talented investors? No, it's in part because the USA is a good place to invest and foreigners are attracted to our open markets, rule of law, and low inflation (don’t laugh, it’s only low relative to other countries but that’s good enough).

It's also due in part to the U.S. dollar's reserve currency status. So many countries and their central banks hold such large balances of U.S. dollars for global trade purposes, an arrangement going back to the Bretton-Woods monetary agreement of 1944.

Therefore there is high demand to park those vast amounts of global reserve dollars somewhere to earn interest while they are not immediately used or needed. One popular instrument, although hardly the only one, is U.S. Treasury Bonds which are perceived by foreigners as safe and highly liquid.

So Americans are paid more on their overseas holdings due to simple supply and demand: a huge demand for U.S. investments chasing a limited supply, and therefore our assets command higher prices which equates to lower investment returns.

A perfect example once again is Treasury bonds. Whatever one might feel about the $21 trillion debt—and I sure don't like it myself—the reality is Uncle Sam enjoys much lower interest payments on U.S. bonds than other countries have to pay investors on their bonds—all because U.S. Treasury bonds are in such high demand with so many overseas dollars to put to work.

***So the second amendment to the now $502 billion merchandise/services trade deficit is to adjust for America’s $212 billion investment income account surplus. The “trade deficit” is now down to $295 billion.
_______

Finally there's other benefits of the U.S. dollar as a reserve currency. Foreign countries and their central banks must hold onto trillions of U.S. dollars to facilitate international trade with one another and to a lesser extent the USA.

So unlike every other currency in the world, U.S. dollars do not automatically come back to the United States to buy U.S. exports. By contrast, if another country like Taiwan buys imports with its currency—the New Taiwan dollar—the trade partner country that receives those New Taiwan dollars has no use for them other than to buy Taiwanese exports in return or invest in some Taiwanese asset.

The U.S. is uniquely privileged in that the dollar is the primary currency used for global trade and held by foreign central banks in large quantities.

Therefore Americans import cool stuff from overseas that enhance our standard of living, and all the foreigners get back is dollars—a great many of which they can never use to buy cool stuff from the USA.

Combined with cost benefits enjoyed by U.S. banks (a smaller benefit) that don't have to worry about converting deposits into a different currency for loans, and don't have to worry about hedging against negative currency movements on their loans, the annual trade benefit to the USA in 2018 is estimated at approximately $250 billion (Eichengreen: $211 billion in 2011 dollars).

However, since we are using 2011-2015 average numbers, adjusting for inflation and world GDP growth we revise the annual benefit to an average of $226 billion.

***So the third amendment to the now $295 billion merchandise/services trade deficit is to adjust for America’s $226 billion global reserve currency benefit, and the “trade deficit” is now a very manageable $69 billion.
_______

Given that our trade picture with the world as a whole is much more balanced than the news would have you believe, you now can put yourself in the position of our trading partners other than China.

China itself still runs a large surplus with the USA—even after adjusting for services, investment income, and reserve currency benefits—in part because it is the world’s low-cost manufacturing workshop, and in part because it does “cheat.”

But that means the rest of the world collectively runs a deficit with the USA—despite protectionist measures on the part of some countries, most of which feel they are simply compensating for the asymmetric benefit the USA receives for holding the global reserve currency.

Even with targeted tariffs on certain U.S. imports, foreign leaders and finance ministers must be shaking their heads when they see the U.S. media repeat “$739 billion deficit" over and over.

Furthermore, with the recent boom in U.S. energy production and rising oil and natural gas exports, it’s not inconceivable that the existing $69 billion total balance of trade deficit can be tipped into surplus in the next few years (assuming no recession comes before then).
_______

One last note about the big-picture trade deficit. There is a missing accounting item I haven't mentioned yet which pushes the actual balance of trade deficit from a relatively insignificant $69 billion back up to a more worrisome $199 billion.

Officially it's called "unilateral transfers" which is another way of saying money crossing borders in exchange for no goods or services in return.

This includes pension, insurance, and tax payments from the residents of one country to another country, foreign aid, or remittances. Americans or foreign residents in the USA, U.S. based institutions, and the federal government send $130 billion more overseas than residents living abroad, overseas institutions, and overseas governments send to the United States.

Two major drivers of these unilateral transfers deficit should be pretty obvious—immigrants sending money from the USA back home, and U.S. government military and foreign aid overseas.

Foreign aid dollars sent overseas and the cost of defending other countries has also traditionally been unpopular with a majority of Americans.

And that is the trade policy space where President Trump should focus. True, illegal immigration has been one of President Trump's policy priorities so it's not as if he isn't trying to stem the tide, but as far as America’s trade deficit is concerned it's the an area he can legitimately point to as being a major driver of trade imbalances.

And Trump has also been trying to get some form of compensation from rich nations the U.S. is defending such as Japan, Korea, and Germany.

The COCEA believes if he focuses more on slowing illegal immigration and foreign/military aid, and less on tariffs that risk destructive trade wars, the USA’s balance of trade deficit picture can be quite acceptable and not that big a deal.
Posted by CDS at 12:00 AM