From the ornate mahogany desk of the Cautious Optimism Correspondent for Economic Affairs and other Egghead stuff. 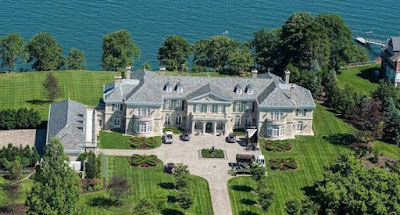 As CO has recently reported, Connecticut is losing population due to the burden of heavy taxation and over-regulation.

Adding fuel to the fire is Connecticut’s heavily progressive and relatively new tax structure. After having no income tax until 1991, Connecticut’s current lowest income bracket has since reached 3% while the tax rate on single earners making over $500,000 has quickly risen to effectively 7% (6.99%).

Taxes on estates of over $10 million is 12% (on top of the federal estate tax rate of 40% for an effective rate of 52%). In addition to property taxes, the corporate state tax rate is among the nation’s highest at 9% (source: Bankrate.com).

All this adds up to a huge share of Connecticut’s tax revenue stemming from a small number of wealthy taxpayers, many of whom own businesses in Connecticut and several of whom have made high profile departures in the last few years. For example, (from the Yankee Institute):

"Connecticut faces an outmigration trend in which higher-earning individuals are leaving the state, with Florida being one of the primary beneficiaries."

"Florida, with no income tax, has been attracting wealthier individuals as Connecticut passed two of its largest tax increases in history in 2011 and 2015. Notably, Florida has siphoned off some of Connecticut’s wealthiest people. In 2015, hedge fund manager Paul Tudor Jones moved from Greenwich to Florida, taking with him nearly $30 million in income tax revenue."

And the two historic tax hikes in 2011 and 2015, combined with the wealth exodus, has put further pressure on the remaining rich. The result has been greater and greater budget dependency on a shrinking and evermore exclusive club of well-to-do citizens. Also from the Yankee Institute:

"A 2014 study by the Connecticut Department of Revenue Services found that 357 families account for 11.7 percent of the total Connecticut income tax burden. Those 357 families paid $682.5 million in income tax in 2014, so minor fluctuations in the number of high wealth families and their income levels can have big consequences for balancing the budget."

Connecticut’s dependence on this dwindling pool of wealthy taxpayers has propelled officials to keep a very close eye on them, even meeting with one personally to discuss what accommodations might convince him not to leave. As the Hartford Courant reports:

“Two years ago, tax officials were alarmed that a super-rich hedge fund owner might leave and reduce the state's income tax revenue. They met with the unidentified taxpayer. The effort was partly successful, with the taxpayer's leaving Connecticut but agreeing to keep the hedge fund here.”

Which raises an interesting question: If government tax policy makes it so dependent on a handful of taxpayers to fund its operations that officials meet personally with them to keep them in Connecticut, is the same tax policy making the same officials vulnerable to political influence?

Or put another way, despite all the grumbling by progressive leftists about the rich “buying” government, does their vaunted progressive taxation actually enable more “government buying” and crony capitalism? Is corruption built into state-level “soak the rich” policies?

When officials rely so heavily on a handful of residents to pull the entire budget wagon, it empowers that exclusive club to exert enormous influence over them. Politicians can more easily be talked into compensatory forms of accommodative policy to keep their sponsors happy.

Perhaps progressive taxation through democratic government produces more undemocratic results than voters and politicians would like to believe—another example of government policy producing the opposite results it was intended to.