The 1950’s Weren’t America’s Most Prosperous Decade: It’s Not Even Close 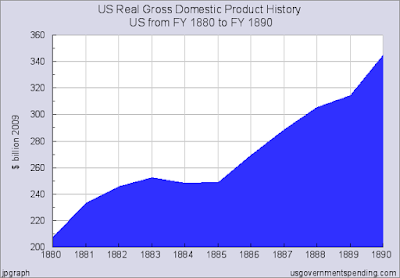 In the recent crusade against “income inequality” it has become fashionable to cite the 1950’s as America’s greatest decade of economic growth—and then credit it almost exclusively to the period’s 91% top marginal income tax rate (the idea being that soaking the rich somehow promotes growth).

In either case, the correlation of big-government interventions with an affluent decade is used to justify steeper taxes and higher government spending today with the promise of reliving the riches of the fifties.

But even though a multitude of deductions allowed nearly everyone to avoid paying the 91% rate, the larger fallacy in both arguments is that the 1950’s simply weren’t America’s greatest growth decade.

For one, the USA experienced two recessions during Happy Days (1953-54 and 1957-58) with two more bookending the decade (one bottoming in October 1949 with America just beginning a recovery in 1950, and another recession beginning in April 1960. Source: NBER). So the slightly longer 10-1/2 year period October 1949-April 1960 encompassed part or all of four recessions.

Second, based on real GDP growth the 1950’s decade barely ranks in America’s top five. Although no government figures exist before the 1930’s, academic estimates show without a doubt that America’s greatest decades of growth were during the post-Civil War era of the late 1800’s—when by the way there was no giant government spending program on interstate highways and federal peacetime spending was typically only 2-4% of GDP.

Statistics can be boring, but in this case a little slogging tells quite the compelling story. Using FRED/BEA figures for 1950-1960 and Johnston/Williamson numbers from usgovernmentspending.com for the 19th century we can compare the 1880’s, the decade when America emerged as the world’s largest economy, and the 1950’s real GDP and per-capita GDP growth rates:

As you can see, it isn’t even close.

Even the destitute 1980’s—when we’re told the great riches of the postwar era were squashed under heartless Ronald Reagan’s iron boot when he cut the top marginal rate from 70% to 28%—outperforms the 1950’s on a per-capita basis.

Third and finally, what growth came out of the 1950’s isn’t explained by 91% high tax rates, wealth redistribution or the Interstate Highway System at all, but rather by the very unsexy, boring, and little-understood international monetary arrangement of the time.

Under the postwar Bretton-Woods agreement the US dollar served as the world’s anchor-reserve currency due to its peg to America’s vast gold reserves, and other member nations’ currencies were convertible to US dollars at fixed exchange rates. However, America’s low money stock-to gold reserves ratio in the first 15-20 years of Bretton Woods undervalued the dollar via its trading partners’ currencies—the exact opposite phenomenon of the overvalued British pound during the interwar gold-exchange standard.

Unlike Britain, which during the 1920’s suffered from chronic trade deficits and gold outflows due to its overvalued currency, the US experienced an export boom during the 1950’s and most of the 1960’s due to the undervalued dollar.

With the exception of the US having already been a developed economy during the 1950’s, strong American exports were driven much the same way China’s deliberately undervalued yuan—pegged at fixed exchange rates to the US dollar by the People’s Bank of China—has stimulated its current export boom.

But the party came to an end in the late 1960’s when aggressive money creation by the Federal Reserve to finance deficits for Lyndon Johnson’s Great Society and the Vietnam War reversed the dollar’s undervalued status to overvalued. America’s trade surpluses turned to chronic trade deficits and the late 1960’s Fed-induced stock market bubble popped, leading America into the stagflation era of the 1970’s.

Sometimes sound answers to economic questions can be a little bit complicated, but Bretton-Woods and an undervalued dollar aren’t quite the progressive soundbite the “91% tax rates made us wealthy” forces are looking for. And certainly neither is “zero tax rates drove America’s truly most prosperous decades.”
Posted by CDS at 12:00 AM